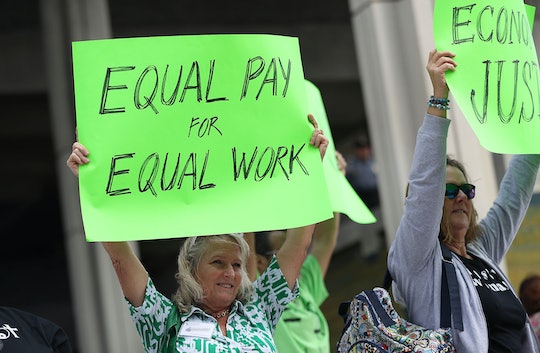 With every day seeming to bring breaking news about women who speak up about past injustices, you would think a more balanced society would be right around the corner. Well, it seems the national dialogue about gender and gender roles hasn't helped move the dial, according to a new study. In fact, a new report says the gender pay gap has barely budged so far this century. Yes, for real.

As U.S. News and World Report outlined, the American Association of University Women (AAUW) has just released new findings that the gender pay gap in the United States has closed by less than five cents in the 21st century. Women nowadays earn approximately 80 cents for every dollar men in the United States earn... about the same as always.

"While the nation's unemployment rate is down, and the number of women working is up, the wage gap is sadly remaining stagnant," Kim Churches, the CEO of the AAUW, said in a press release that accompanied the findings. "It's unacceptable. There is no gender differentiation when it comes to quality, skills and talent."

This pay gap, which is technically defined as the difference in men's and women's median earnings, means, overall, that women miss out on approximately $500 billion in earnings per year, which would otherwise be added to the economy, as a 2017 report from the Institute for Women's Policy Research noted.

The AAUW report also noted that this issue is true across all demographics, though the pay gap is even more glaring for women of color and older females.

And while the new numbers show the gap has closed a bit since 1960, because women have sought additional education and joined the workforce in increasingly large numbers, as well as men's own wages rising more slowly, at this rate of change, full pay equity is a long way off.

For starters, at the rate things were going between 1960 and 2017, it was bad enough — pay equity wouldn't be reached in the United States until 2059. But, and this is a big "but" in the study, something happened in 2017, with progress almost completely stalling. At the current, adjusted rate, American women will be paid the same as a man for the exact same work in the year... 2106!

If you ask me, when people start talking about equal pay in the same breath as a futuristic, sci-fi thriller that takes place almost a century from now, and maybe includes a District 12, I think you can be pretty sure that something has gone amiss in society.

But wait, it gets worse. According to the report, the gender pay gap isn't a static thing — it has long-reaching consequences. In 2017, according to the findings, 13 percent of American women ages 18 to 64 lived below the federal poverty level, while slightly fewer men — 9 percent — did. Additionally, 11 percent of women over the age of 65 and 8 percent of men lived below the federal poverty level.

Part of the problem here is that employers have long used previous salary history to help determine what your new salary should be, and since women were already making less than men, this practice just perpetuates the cycle. Not only that, but they're paying less into Social Security and will receive a lower pension, according to a 2013 paper from the Institute for Women's Policy Research. Any other benefits that take salary into account with also be diminished, when you compare them with men's.

The AAUW report adds that not all fields are alike. Retail managers, accountants, and office supervisory roles are examples of professions with large collective gender pay gaps. Additionally, women who are financial managers only make 65 percent of what men holding that title are paid, for example, as U.S. News and World Report noted.

This is sobering news, but I have to take heart that the issue isn't being whispered about anymore. Celebrities from Oprah to Kerry Washington are speaking up, as The Cut noted, and Equal Pay Day, established in 1996 as per NBC News, is a Tuesday every April in which the discrepancy is marked. However, as Equal Pay Today noted, the April date only marks the equivalence for white women. Asian-American women's Equal Pay Day is in February, while Hispanic and Latina women do not hit the marker until November. Black women's Equal Pay Day is in August and Native women achieve equal pay in September. Patricia Arquette even made equal pay the subject of her 2015 Oscar speech, as The Cut noted.

Everyone has to stay on top of this one, not only for women, but for future generations, too. How can kids learn about "playing fair" if parents and adults are not advocating for fair treatment?

More Like This
Pinterest Predicts Their Top 2023 Trends In Parenting, Beauty, Fashion, Home, & More
Aww! 2-Year-Old Archie Is "Very Happy" To Be A Big Brother
Meghan Markle Wrote An Emotional Poem About Being A Child Of Divorce When She Was 12
'Harry & Meghan' Shares Never-Before-Seen Photos Of Archie & Lilibet