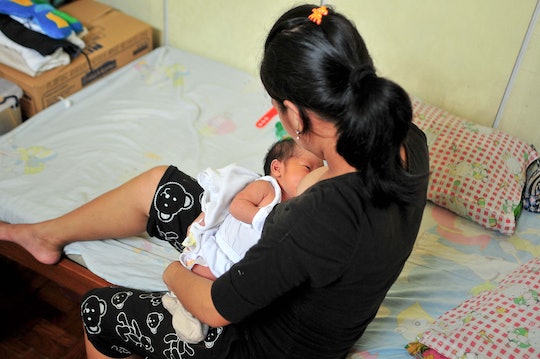 Breastfeeding After A C-Section Could Reduce Pain

C-section births account for about a quarter of all births in the United States, Canada, and the United Kingdom. They can be extremely painful and the healing process can be long. These added challenges are a testament to the power of moms as they fight through the pain to care for their new babies. Fortunately, new research out of the Euroanaesthesia Congress in Geneva indicates that breastfeeding during the healing process can lessen the likelihood of prolonged pain after a c-section.

The study was conducted by Dr. Carmen Alicia Vargas Berenjeno and colleagues from the Hospital Universitario Nuestra Señora de Valme in Sevilla, Spain, and included 185 mothers who had c-section births at the research hospital between January 2015 and December 2016. Following the births, these mothers were interviewed about their breastfeeding habits and the levels of chronic pain they experienced up to four months later.

In addition to providing further insight into the benefits of breastfeeding for mothers, the researchers believe that their findings can serve to motivate more new moms to try breastfeeding. In a statement to Science Daily, they wrote, "Our study provides another good reason to encourage women to breastfeed."

Research into this topic is still ongoing and the data is still developing. The authors are reportedly analyzing additional data gathered from women who were interviewed between November 2016 to January 2017. Hopefully, with more time, further promising results will be uncovered.

More Like This
Does The FDA's Plan To Limit Lead In Baby Food Go Far Enough?
Doctors Swallowed LEGOS To Prove Everything Is Awesome For Kids Who Do The Same
Here's Why Your Vagina Burns After Sex
Parents Have Thoughts After Court Orders Nursing Mom To Use Bottle In Custody Dispute
What Parents Are Talking About — Delivered Straight To Your Inbox