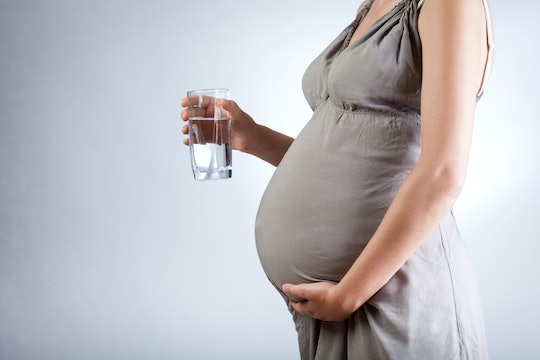 At the end of the day, all that pregnant women want is to feel like they're doing something right and that they're keeping their unborn child (as well as themselves) safe. But there are so many things out there than can threaten that safety. Pregnant women are so used to hearing what they can't do — and those same women need to listen to this new research that suggests levels of fluoride in your urine during pregnancy might be tied to ADHD symptoms later on in their kids lives.

Fluoride is pretty inescapable. Tap water and dental products in the United States both contain trace amounts of fluoride, according to LiveScience. Fluoride prevents tooth decay, according to LiveScience, and studies have shown that it is safe to consume and people have been benefitting from fluoride in their water for the past 70 years, according to the Centers for Disease Control and Prevention (CDC). But people might want to watch their consumption of fluoride after reading this new study, which tied fluoride consumption in pregnancy to ADHD symptoms later on in life.

The study, conducted by researchers at the Dalla Lana School of Public Health at the University of Toronto, analyzed data from 213 mother-child pairs in Mexico City, Mexico that were a part of a special project that recruited pregnant women, according to ScienceDaily. The research team analyzed urine sample from these women while they were pregnant, in addition to their kids (who are now between the ages of six and twelve).

After putting the kids through a variety of tests and questionnaires, the researchers were able to conclude that there was a link between elevated prenatal exposure to fluoride and reported symptoms of ADHD.

Dr. Morteza Bashash, lead author and researcher of the study, explained the findings in the study's press release:

Our findings show that children with elevated prenatal exposure to fluoride were more likely to show symptoms of ADHD as reported by parents. Prenatal fluoride exposure was more strongly associated with inattentive behaviors and cognitive problems, but not with hyperactivity.

And as with most studies, more research could be done on the subject with a larger sample size (and perhaps in the United States) to strengthen these findings and find a viable solution, according to the study's press release. It is unclear if these women came from families where ADHD was prevalent, or if they had levels of lead in their urine — both of which are linked to ADHD development in children, according to Health.

This isn't the first time that fluoride consumption by pregnant women has been linked to ADHD in children. One 2015 study published in Environmental Health found that parents reported higher rates of ADHD in states where fluoride levels in drinking water is high. But, the authors of the study also determined that more research needed to be done on the subject.

Although this link sounds understandably scary to some pregnant women, some things should be known. There are a few known causes of ADHD — studies have shown that genetics can play a role in children developing ADHD, according to Mayo Clinic. But things like environmental factors, such as lead exposure, has been linked to ADHD development by researchers in the past, as well as nervous system development.

Therefore, fluoride consumption shouldn't be solely blamed for ADHD in young kids — it's just a possible contributing factor. Fluoride is safe for kids, according to the CDC, and no studies have addressed if low fluoride causes birth defects.