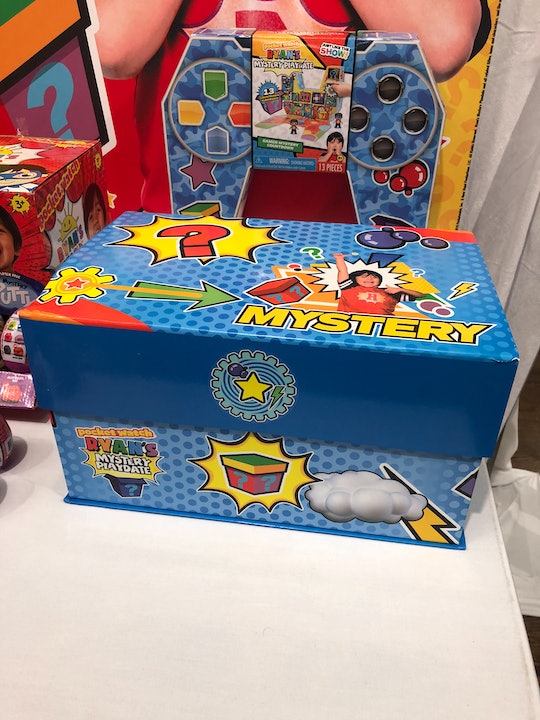 For fans of Ryan ToysReview, there's a whole new reason to get hyped up for the coming holiday season. A whole collection of must-have toys from the mega-popular YouTube star will hit retailers everywhere soon. Based on his show Ryan's Mystery Playdate, new toys from Ryan's World are debuting soon. Now you know exactly what to get for the child who can't stop singing "Who Will It Be" all day long.

Launching on November 1, 2019, the three new toys will immediately appeal to Ryan's Mystery Playdate viewers. The full details about these new products have not yet been released, but the early pics look pretty exciting. For now, note that the biggest box features a costume set with four different costume outfits (including a policeman and firefighter) and 14 pieces total, and it will retail for $39. Other cool products include the cool surprise door from the show, as well as a collection of figures representing some of Ryan's favorite guests. Lastly, there's a neat mystery gamer countdown in a box shaped like a controller, and it's packed with mystery prizes. Basically, this collection of cute figures, costumes, and a whole box of surprises will appeal to plenty of kids, especially with the endorsement of YouTube mega-star Ryan of Ryan's ToysReviews.

For kids in a certain age bracket, there's no celebrity quite like Ryan. With over 20 million subscribers and views ranging in the billions, the Ryan ToysReview YouTube channel is basically its own cultural force. What began as a simple channel showing a cute kid reviewing toys has turned into a multimedia sensation. In addition to the YouTube channel, Ryan also has his own TV series, a gaming app, and a line of toys sold under the name Ryan's World. Oh, and as of this writing, Ryan is all of 8 years old. (Yes, it's OK to feel a bit jealous.) By becoming a YouTube star and serious toy influencer, Ryan is basically living the dream of many kids.

Following the runaway success of his YouTube videos, Ryan made the jump to TV. The live television series Ryan's Mystery Playdate debuted on April 19, 2019 on the Nick Jr. channel. The show, which stars Ryan and his parents, also features surprise guests including a firefighter, a skateboarder (none other than Tony Hawk), a juggler, and a surfer. Basically, anyone who appeals to the preschool set is welcome to join in, and the formula appears to be a success. After a first-season run of 20 episodes, Ryan's Mystery Playdate has been renewed for a second season set to debut in on September 30, 2019.

If your kid is already a fan of the show, then the new line of merch is probably going on the "gotta have it" section of their holiday wish list. For the current generation of kids, YouTube stars are already major movers and shakers in the culture, and there's no one else quite like the peppy and energetic host of Ryan ToysReview. Now your kids can also pretend to be a huge YouTube sensation with the line of toys from Ryan's Mystery Playdate.