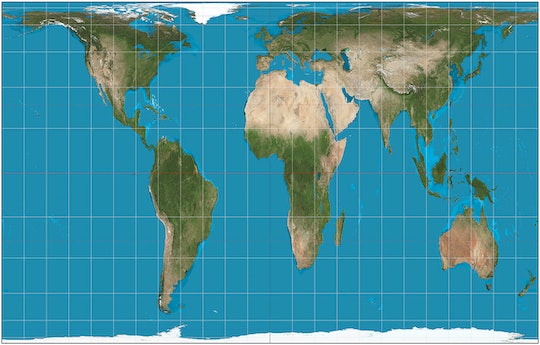 These New School Maps Are Mind-Blowing

For nearly 500 years, schoolchildren have been learning geography completely wrong. Boston Public Schools recently introduced new maps that more accurately depict the world, and it's been blowing students' minds. But they've only been studying the old maps for five or 10 years; what about grown-ups? After internalizing the old maps for decades, it's pretty crazy to find out that we've all been wrong all this time. A comparison of the new and old maps shows a stark difference, and makes one wonder what else was all a lie.

According to the Guardian, the maps we all grew up with are based on the Mercator projection, created by Flemish cartographer Gerardus Mercator in 1569. We have satellites now! Why are we still relying on the sketches of a man who existed before toilets? Comparing the old maps to the Gall-Peters projection, finalized in 1974, offers a clue. The Mercator projection makes Europe the center of the world, and greatly exaggerates its size, while shrinking other territories. It turns out that Europe, the United States, and Greenland are actually much smaller than we were taught, and Mexico, South America, and Africa are much larger. Now, why would anyone want to misrepresent those particular areas? Very curious.

But "white countries are yuge" isn't the only lie we were taught growing up. A good amount of what we learned was actually completely inaccurate. Let's unpack a few alternative facts, because it's time to hear the truth.

Despite what certain high-ranking government officials might say, nobody from Africa ever boarded a Carnival cruise ship eager to start a new life in America. Believe it or not, they were actually kidnapped and brought to the new world against their will. They also didn't work "even longer, even harder for less." They worked for nothing, because they were forced to. And if they didn't? They could face death or severe physical punishment.

Abstinence-only "education" teaches kids to prize virginity over all, and compares sexually active women to used chewing gum. Fun fact: virginity is actually just a social construct, and has no bearing on a person's worth. You can have sex once or 100 times, and you're still the same person you were before, even if you're a woman! Also, butt stuff counts as sex, if that wasn't clear.

In 1492, Columbus sailed the ocean blue to a continent that people were already living on, which had previously been visited by other Europeans. Then he robbed, raped, tortured, and enslaved everyone he met there. I'm sorry that doesn't rhyme.

Pluto Is, Sadly, Not A Planet

When the news of Pluto's downgrade first broke, many took offense on behalf of the tiny dwarf planet. How can you fire Pluto? It's basically a space Valentine! The truth is, Pluto didn't lose its planet status; it actually never was one. It was discovered by someone whose entire job was to try and find a ninth planet, so the motivation is pretty clear. But we know more today than we did in 1930, so unfortunately, you'll have to come up with a new mnemonic to remember the planets now.

Sorry, but there is absolutely no evidence that Betsy Ross designed or sewed the first American flag. The story didn't even surface until about 100 years after the flag was created, and it was put forth by none other than her grandson, whose evidence was "my family told me so." Aw, buddy. I feel for you, but unfortunately, your family is a bunch of lying liars.

Mother Teresa & Ghandi Were Not Who You Thought

Mother Teresa and Mohandas Gandhi are held up as the pinnacle of kind, selfless, loving human beings. But you know that saying, "Nobody's perfect"? Yup, definitely applies. Mother Teresa was actually not so hot at saving the poor after all, and Ghandi had some deeply disturbing views. I'm being gentle, but click the links to have your core shaken, if you like.

This might come as a shock, George was not a good little monkey like we were told. Anyone who's read the books or seen the cartoon knows that his behavior is actually pretty nightmarish, but did you know that he's not even a monkey at all? Look at that butt! No tail. That makes George an ape, not a monkey. Also, the Teenage Mutant Ninja Turtles are tortoises, sorry.

Dinosaurs Were Not Terrible Lizards

This might be the hardest truth, but dinosaurs probably looked way less rad than we thought. Recent discoveries suggest that almost all of them had feathers, meaning they looked more like Big Bird than Godzilla. And velociraptors were actually the size of turkeys. So does that mean the Jurassic Park movies are all B.S.? Yes, but at least they own it.