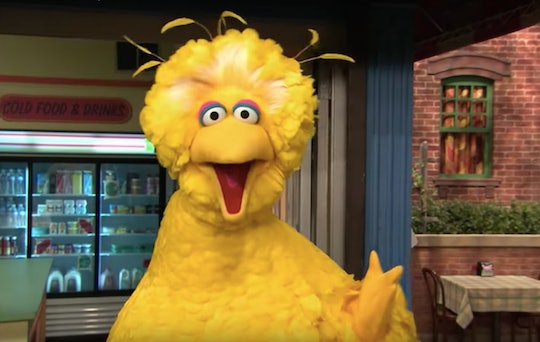 Season 50 (Yep, 50!) Of 'Sesame Street' Will Open With An Exciting Celebration Episode

Oh boy, oh boy! This is the kind of news that I love to share. The newest season of Sesame Street will premiere in less than a month. That's right, the wait is nearly over for the quality content that generations have come to expect from the big brains at Sesame Workshop, the nonprofit organization behind Sesame Street. Parents and children alike can rejoice over awesome celebrity guests, their old favorite residents, and even some new faces.

Sesame Workshop announced this week that the historic 50th season of Sesame Street will begin on Nov. 9 with a "star-studded primetime special." Indeed, the season will open with Sesame Street’s 50th Anniversary Celebration, a look back on half a century of fun and learning on Sesame Street.

The season's first regular episode will air on Saturday, Nov. 16, on HBO Max before becoming available on PBS down the line. As for the celebrity guests that have been announced for the rest of the season, expect to see familiar faces such as Chrissy Teigen; musicians Charlie Puth, Dave Grohl, and Maren Morris; ballet dancer Misty Copeland; comedian Michael Che; and Olympic athlete Chloe Kim.

Along with plenty of song and dance, the new season is set to explore timely stresses and pressures faced by modern children. It will also introduce new characters and cast members and " celebrate the 50 years of iconic children’s television," according to Variety. All in all, it sounds like an exciting season to come!

The pressures faced by today's kids are vast and varied, and Sesame Street will work to address them. The curriculum focus of Season 50, according to Sesame Workshop, is titled “Oops and Aha!: Embracing the Power of Possibilities."

Dr. Rosemarie Truglio, Sesame Workshop’s Senior Vice President, Curriculum and Content, explained in a press release how young children are expected to meet benchmarks like never before. "Today’s preschool kids are under an unprecedented amount of stress and pressure to meet certain academic and social-emotional benchmarks, often before they’re developmentally ready," she said. "That result-oriented mindset can make kids afraid to take even the safest risks – never trying to pour their own milk for fear of spilling it."

But this season of Sesame Street also shows how parents and other caring adults can help relieve some of that pressure by enabling children to make important mistakes and learn from them.

The excitement will last throughout the season. Sesame Workshop has also announced that later on in the season, a new neighbor is coming to the street: 8-year-old Charlotte (played by Violet Tinnirello) who is a military child who has moved to town with her family. Her storyline will follow her as she explores her new home and experiences the struggles unique to military families. "Charlie," as her friends call her, is the first child to join the Sesame Street cast in more than 20 years.

All of these exciting announcements will likely have you and your little asking, "Can you show me how to get, how to get to Sesame Street?" The show has recently made the move to HBO, but new episodes will also air on PBS at a later date. No matter how, where, or when you watch the new episodes, you're in for some serious fun.