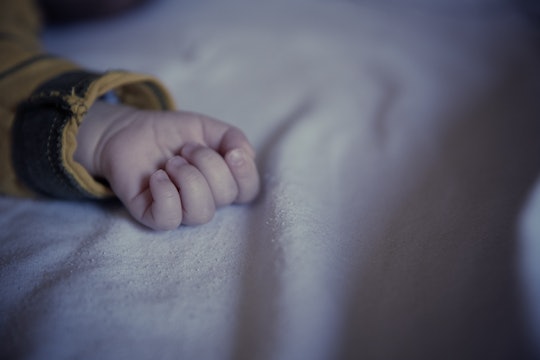 Sudden Infant Death Syndrome may be more avoidable than it's been presented as. A new SIDS study shows parents are putting babies in unsafe sleep positions, endangering infants and putting them further at-risk. The study delved deep; rather than solely trust self-completed surveys and police reports, researchers used actual video recordings of parents in an effort to get "a window into parental behavior during the night." This revealed some frightening truths about bedtime routines that offer much-need insight into a truly scary situation.

The study examined the bedtime habits of 160 babies at one month, three months, and six months old. Researchers found that at one month old, 91 percent of the infants observed were sleeping with loose items around them, such as bedding or stuffed animals. At three months, this increased to 93 percent. The study also discovered that, at one month, 14 percent of babies were not placed on their backs to sleep. At six months, this value jumped to 33 percent.

The September study by the American Academy of Pediatrics concluded that "most parents, even when aware of being recorded, placed their infants in sleep environments with established risk factors." Shockingly, knowing that a recording was taking place did not prevent parents from engaging in risky sleeping situations, suggesting that, perhaps, they were unaware of the potential risks. Furthermore, in scenarios in which the babies were moved at some point during their night's sleep, such as being moved to their parents' bed, this new "second sleep environment generally had more hazards," increasing the danger for the baby.

Babies need to be placed on the back for every nap and every night until the baby is 1 year old. No blankets, no bumpers, no pillows, no stuffy animals, but always on a firm, authentic baby crib mattress!

Most parents seek to do whatever they are able in order to keep their babies safe, but they can, of course, get tired and thus less attentive. A CBS News report interviewed Brooklyn pediatrician Dr. Hai Cao, who emphasized the role doctors play in preventing SIDS, saying that "pediatricians [need] to get the word out a little bit more." Specifically, Cao recommended abandoning antiquated views of sleeping behaviors—so-called "generational things that have been passed down...that we've gotten comfortable with doing that maybe we shouldn't be doing."

Whereas the study showed parents were not attentive enough, that doesn't mean the problem can't be addressed. Eliminating stuffed animals, bed bumpers, pillows, and sheets are necessary steps for keeping sleeping infants safe, along with placing babies on their backs to sleep. Just a few seconds more of attention are all it takes to promote a less-risky bedtime.