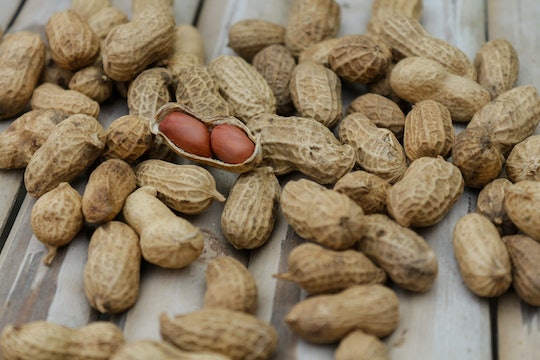 Having a child with a peanut allergy has to be one of the most anxiety-inducing experiences for a parent. After all, in some cases, even trace amounts of peanut products can induce anaphylaxis that could lead to death without prompt medical attention. But according to CNN, researchers at the Consortium of Food Allergy Research have found that new skin patches could help kids with peanut allergies reduce their risk of severe reactions by slowly building up a tolerance to peanuts to a level where accidental exposure might not be quite so dangerous. The study, published last week in the Journal of Allergy and Clinical Immunology, found that, almost half of all study participants who wore the Viaskin peanut patch every day for a year had a "peanut threshold" 10 times higher at the conclusion of the study than the amount they were originally able to tolerate.

The Viaskin patch works as a form of epicutaneous immunotherapy (EPIT), which means that very small doses of a specific allergen (in this case, peanuts) is released into the skin when the patch is worn, triggering an immune response in the body without allowing the allergen to enter into the bloodstream. Over time, continued exposure would potentially give the participants' immune systems the opportunity to adjust, and build up a tolerance that would make their peanut allergies less severe.

According to a news release by the National Institutes of Health — which sponsored the study — 74 individuals aged 4 to 25 years participated in the Viaskin trial, and were divided into three random groups. The first group wore a 250-microgram patch; the second, a lower-dose 100 microgram patch; and the third, a placebo patch that contained no peanut protein. After one year, researchers found that 48 percent of participants who wore the 250 microgram patch and 46 percent of participants who wore the 100 microgram patch could consume 10 times more peanut protein orally at the end of the study, compared to 12 percent of those in the placebo group. But younger participants seemed to respond best: children aged 4 to 11 years old were more likely to benefit from the Viaskin patch than those aged 12 or older.

Another promising aspect of the study is that the Viaskin patch was mostly well-tolerated among participants, according to CNN. Only one participant, a teenager, had to withdraw from the study due to an allergic reaction, and while 80 percent of participants reported experiencing side effects from the patch, they were predominantly mild, and mostly due to irritation from the patch itself. Although skin irritation isn't fun by any means, the benefits of the using the patch may give it an edge over other immunotherapy options, like oral treatment, or injections. The patch, for example, is easy to use, and 97 percent of study participants used it daily, suggesting that there weren't many barriers to incorporating the treatment into their lives. And since young children are often afraid of needles, the patch would be a much more tolerable option for that age group.

Of course, it's important to note that Viaskin isn't a cure for peanut allergies, and even with the patch, those with allergies will still have to remain vigilant about exposure to peanuts. The study's lead researcher, Dr. Stacie M. Jones, told CNN that even a 10-fold increase in tolerance only really means that the participants could eat one-seventh to one-half more of a peanut on average, which is obviously not a lot. But for young kids who might be accidentally exposed to peanut products, having that extra cushion of tolerance could make a huge difference.

The development of the peanut patch comes at a time when a growing number of children with peanut allergies is driving a need for more information and investigation about how to best keep children safe — and that's led to a reversal of some long-held guidelines. According to The Wall Street Journal, up until 2008, the American Academy of Pediatrics (AAP) recommended delaying children's first exposure to peanut products until as late as age 3, but a 2015 study in the New England Journal of Medicine found that, not only does delaying exposure not actually help, early exposure can actually prevent allergies from developing in most children, according to The New York Times. Further research, endorsed by the AAP, found that even high-risk infants — those who developed "severe eczema, or [an] egg allergy in the first 4 to 6 months of life" — can also benefit from early exposure, and recommended that "health care providers should recommend introducing peanut-containing products into the diets of high-risk infants between ages 4 and 11 months."

In an article for Allergic Living earlier this year, Lianne Mandelbaum wrote about her son Josh's experience in the Viaskin trial. Josh ended up being one of the participants who received the Viaskin patch versus the placebo, and at the end of the trial, his peanut tolerance had increased from only one-eighth of one peanut to one-half of a peanut. While that might not seem like a huge increase to most people, Mandelbaum wrote that, to her and her son, that was a big deal:

The treatment has already made a big difference in our lives. With Josh wearing peanut proteins daily, accidental contact is not a big concern anymore. Judging from his second peanut challenge, he also appears to have more protection against accidental ingestion. By being in a study, Josh also feels he is doing something that may one day make life easier for other kids with a peanut allergy.

While more studies are needed before Viaskin can become a more widely-used therapy for peanut allergies, researchers are hopeful that it could improve children's lives. According to The Daily Mail, Marshall Plaut, chief of the Division of Allergy, Immunology, and Transplantation's Food Allergy, Atopic Dermatitis and Allergic Mechanisms Section, noted that "the high adherence to the daily peanut patch regimen suggests that the patch is easy-to-use, convenient and safe." And to parents and children everywhere who manage peanut allergies every day, that is surely amazing news.