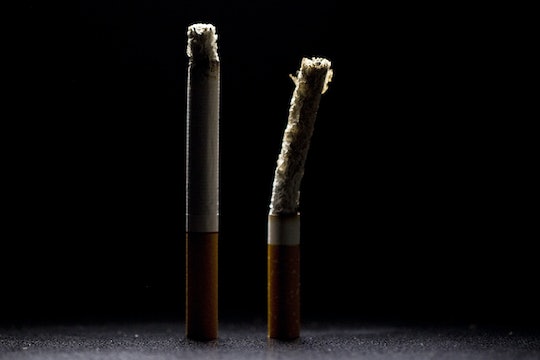 Research released on Tuesday has shown that smoking is even worse for the human body than previously believed. According to a new study on smoking and tobacco use, smoking has the ability to scar our DNA. While a majority of the damage does fade over a period of about five years if a person quits tobacco, a team of researchers discovered that some of the harm may actually be permanent. After studying 16,000 people, Roby Joehanes of Hebrew SeniorLife and Harvard Medical School told NBC News that their "study has found compelling evidence that smoking has a long-lasting impact on our molecular machinery, an impact that can last more than 30 years." For parents and guardians everywhere, the results of the study are just the latest reason to teach your kids the seriously damaging effects of tobacco.

Knowing that tobacco is harmful for the human body is nothing new. According to the Centers for Disease Control and Prevention (CDC), cigarette smoking causes over 480,000 deaths in the United States each year. This constitutes more deaths each year than human immunodeficiency virus (HIV), drug and alcohol use, and car related injuries combined. If those statistics don't reinforce how damaging tobacco is, the CDC also reports that "more than 10 times as many U.S. citizens have died prematurely from cigarette smoking than have died in all the wars fought by the United States during it's history."

Worse still, PBS reports that as of 2015, 1.1 millions Americans have died in all U.S. wars — and despite the alarmingly high number, that's still just a fraction of the deaths caused by tobacco.

Smoking is one of the worst things you can do to your very own DNA. According to CBS News, the team of researchers discovered that tobacco has damaging effects on more than 7,000 genes. This equals roughly one-third of human genes. They were able to uncover this by focusing on a process called DNA methylation, which causes "genetic changes that don't alter genes' underlying code but can change how they're expressed." While a majority of people who quit smoking will see their DNA return to normal after a period of around five years, some smokers will have permanent damage.

Parents need to thoroughly warn their children from making the decision to try smoking. While heart disease and cancer can both be caused by inherited genetic damage, this new study shows that the majority of cases are caused by how people lead their day-to-day lives. So if those numbers from the CDC weren't enough to convince you to have a serious discussion with your kids about tobacco, this new study will definitely change your mind.