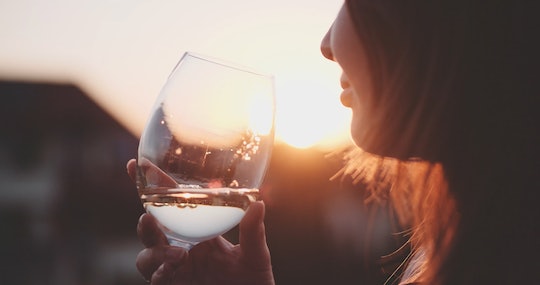 Being a woman of reproductive age means you have to deal with a lot of judgement around your body and what you do with it. Back in 2016, the Centers for Disease Control and Prevention memorably advised all sexually active women of reproductive age not to drink, because they could harm a developing fetus, if they were actually pregnant. Now, a study suggests that the CDC exaggerated women's risk of alcohol-exposed pregnancies. And this shows just how women of childbearing age are introduced to a whole lot of unfair judgement.

In 2016, the CDC issued a press release stating that over 3 million women in the United States risk delivering babies with fetal alcohol spectrum disorders because "they are drinking, sexually active, and not using birth control to prevent pregnancy". The CDC recommended that women stop drinking as soon as they stop using birth control. If women wanted to drink, then recommendations meant they should remain on birth control, even if they were trying to conceive.

A response article by The Atlantic noted the CDC's recommendations assumed "women have no knowledge of or control over their own fertility." In addition, while heavy drinking while pregnant can absolutely impact your child, Emily Oster, author of Expecting Better: Why the Conventional Pregnancy Wisdom Is Wrong — and What You Really Need to Know, told Quartz that scientific literature stated "occasional" drinking during pregnancy may not negatively affect your developing fetus.

And now, researchers digging a little bit deeper into this topic have found that the CDC may have exaggerated the actual risk of accidentally exposing pregnancies to alcohol. This opens up new conversations about how organizations are reporting data about women and pregnancy.

The study, published in the journal Women's Health Issues, challenged the CDC's conclusions. According to Quartz, Sarah Roberts and Kristen Thompson of the department of gynecology at the University of California — San Francisco led a research team that looked at the same data set that the CDC had used to issue its recommendation to get a clearer picture of the real risk of alcohol-exposed pregnancies (AEPs).

Roberts told Quartz that the CDC essentially based its recommendations on the highest potential number of AEPs, instead of a more likely or realistic estimate. In the study's abstract, researchers noted that they made four key changes to the CDC's approach. This included determining just how often women actually get pregnant from unprotected sex to including all outcomes of pregnancy: birth, miscarriages, and abortions.

Regarding the CDC's estimates, Advancing New Standards in Reproductive Health tweeted, "Overestimating the number of women who use alcohol during pregnancy can lead to panic and bad policy."

More than anything, this shines a light on how women of reproductive age are often poorly treated within the medical field. It has been noted that the United States has worst rate of maternal mortality in countries of similar economic status. One critique is that society treats women more as vessels for kids and doesn't pay enough attention to their own well-being, as seen through the reduction of women's health care.

It is important for organizations as big as the CDC to be careful with how they're measuring and reporting data. It can definitely have negative consequences if it's unclear or if people misunderstand. Hopefully, this new study helps to shine a light on things.