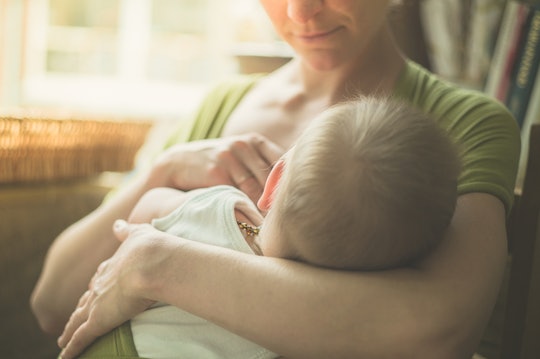 Breast Milk May Protect Babies From Food Allergies, Proving That It Really Is Liquid Gold

The debate on what influences food allergies to develop in children has taken many turns throughout the years — and with it, recommendations from experts on when to introduce common allergens. Take peanuts for example: For years, the recommendation was to hold off on feeding your child foods with peanuts in them under the toddler years. Now? The American Academy of Pediatrics (AAP) actually recommends exposure before age 1 for children who are at high-risk. But how does breast milk — and what mothers eat while breastfeeding — play into the food allergy conversation? As it turns out, breast milk may protect babies from food allergies, according to a new study, proving once again that it really is liquid gold.

The new study published today in The Journal Of Experimental Medicine is the first controlled research showing breast milk may offer protection against food allergies — while also pointing to a biological mechanism of inducing food tolerance, MedicalXpress reported. This research from Boston Children's Hospital supports recent allergy-prevention guidelines, which rejects prior advice urging mothers to avoid highly allergenic foods during pregnancy or while breastfeeding. (It also supports this study from September, which concluded that eating peanuts while breastfeeding can prevent peanut allergies.) Pretty cool, huh?

So here's the lowdown on this newly-published research: For the study, pregnant mice exposed to egg protein transferred antibodies through breast milk that, in turn, protected their offspring. How, you ask? Antibodies from mothers' milk caused the baby mice to produce allergen-specific regulatory T immune cells, according to MedicalXpress, which allowed them to tolerate the allergenic foods. Sounds like quite the mouthful — throwing around fancy terms like "T immune cells" and "antibodies" all willy-nilly — I know. But stick with me, here.

"Whether mothers should eat allergenic foods during pregnancy or avoid them has been controversial," explained Michiko Oyoshi, PhD, who led the study, according to Science Daily. He continued:

Different studies have found different results, in part because it's hard in human studies to know when mothers and babies first encountered a specific food. But in a mouse model, we can control exposure to food.

MedicalXpress reported that breast milk from mothers who consumed egg protein protected offspring from anaphylaxis, as well as two other common indicators of an allergic response. (Immunoglobulin E production and expansion of mast cells, whatever that means.) And here's the really cool part: Breast milk offered this same protection even when it was fed to unrelated offspring that weren't exposed to food allergens in utero, according to the findings. What's more, when mothers who never consumed egg protein were given antibodies from other mothers, their breastfed babies were also protected. Here's something else to keep in mind, according to Science Daily:

Researchers even took this a step further, according to MedicalXpress, by using human breast milk. When human milk was fed to mice with humanized immune systems, it was also protective. This suggests that the findings related to mice in the study might also translate to humans.

Here's the bottom line: This study is important because it confirms new dietary recommendations for nursing and pregnant mothers. Although prior research had been inconclusive, it is now recommended that women shouldn't avoid allergenic foods while pregnant or nursing unless the mother herself has already been diagnosed with food allergies. So bring on the omelettes and PB&J sandwiches, mamas.

My husband has a severe peanut allergy (and other tree nuts), so I've always been nervous about introducing peanuts to my little ones. With that said, I still occasionally indulged in peanut butter and other nutty foods away from my husband. These habits didn't stop during pregnancy or while I was breastfeeding. And if peanuts works the same way as egg protein did in this research, this choice could have very well been helping my kiddos all along. Pass the Reese's peanut butter cups, please!