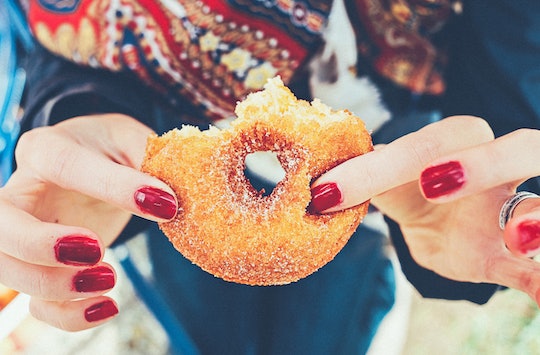 A pickle ice cream sundae with potato chip sprinkles might sound oh-so-delicious when you’re pregnant and it might be all you’re craving at the moment. You’re growing another person, so why shouldn’t you indulge in these new odd, but tasty and amazing creations, right? Well, a new study says giving in to all your pregnancy cravings could be a bad thing.

Typically, when you give in to your cravings it’s your body’s way of telling you what it needs. Like when you’re thirsty, you need water. Or like when you really want a piece of chocolate, you probably need a sugar boost. It would only seem logical to give in to these, especially during pregnancy. However, a recent study found that doing just that could actually do more harm than good.

The study published in the health journal Appetite on May 20 found that women who gave in to such cravings were more likely to gain too much weight during their pregnancy. More than 50 percent of American women in the study gained an excessive amount of weight and all women had given in to at least one craving, with sweets and fast foods being the most common, according to the study.

Food cravings can start as early the first two or three weeks of pregnancy, sometimes without even knowing you’re pregnant. Unfortunately, completely giving in to these changes with your body, appetite, and taste buds can lead to excessive weight gain, which can increase your risk for gestational diabetes and high blood pressure.

On average, during pregnancy a woman needs to gain 25 to 35 pounds, which equals only about 300 extra calories a day. That’s less than a grande Starbucks hot chocolate. Joanne Stone, MD, coauthor of Pregnancy for Dummies told Parents magazine that these extra calories should ideally come from healthy foods.

Gaining weight while you’re pregnant is not only natural, but it’s essential. But, the sad news is that the age-old saying of “eating for two” simply isn’t healthy and could make weight-loss efforts in the future more difficult. In fact, previous research has found that the more weight you gain during pregnancy, the harder it will be to lose after giving birth.

Don’t feel like you have to completely deprive yourself of all of your new cravings. So, if you find yourself craving something super sweet, try to find a more healthy and satisfying substitute, like a piece of fruit or low-fat frozen yogurt. But, if you really need that chocolate covered pickle, go for it, but moderation is key.