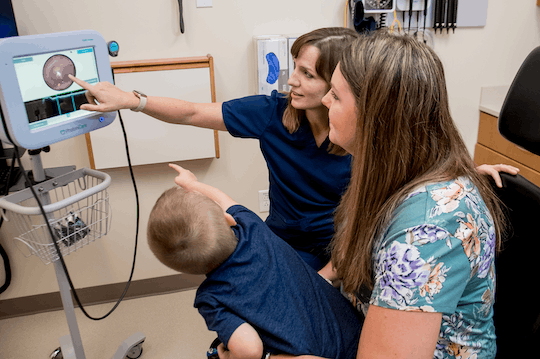 The Food and Drug Administration (FDA) recently approved a new technology that could help doctors detect middle ear infections, potentially helping improve rates of misdiagnosis and reduce antibiotic over-treatment. Developed by PhotoniCare, Inc., the TOMiScope uses advanced light-based technology to not only examine the eardrum, but see through it to provide physicians with a high-resolution depth image of the middle ear for the first time.

That's where PhotoniCare is hoping the TOMiScope will have an impact. The device obtained 510(k) clearance from the FDA earlier this month. "A 510(k) is a premarket submission made to FDA to demonstrate that the device to be marketed is safe and effective, and is substantially equivalent to a legally marketed 'predicate' device," an FDA spokesperson tells Romper. "In the case of TOMi Scope, PhotoniCare Inc. demonstrated that they were substantially equivalent to a predicate device through a combination of clinical and non-clinical studies."

While designed to look, and even handle, much like the standard otoscope health care practitioners have been using to examine ears for decades, the TOMiScope is reportedly the first device to actually provide doctors with non-invasive imaging of the middle ear. It uses a light-based imaging technique called optical coherence tomography to see behind the eardrum and into the middle ear. The TOMiScope then provides cross-sectional images of the middle ear as well as high-resolution video of the eardrum surface, enabling providers to assess whether fluid has accumulated in the middle ear.

According to Dr. Michael Novak, an otolaryngologist with a subspecialty in otology at Carle Foundation Hospital, the TOMiScope's ability to provide doctors with more information from even the briefest of looks inside a child's ear is what really sets the device apart from the standard otoscope. "It takes just a second or two of visualization of one part of the drum to get an answer," Dr. Novak, who was involved in both the development and clinical trials of the TOMiScope, tells Romper. "And anyone with a sick and unhappy 2-year-old will know you often only have a second or two to look inside their ear."

Additionally, PhotoniCare claims that the OCT images produced by the TOMiScope "can eliminate the subjectivity and guesswork inherent in current diagnostic tools," enabling first-line providers such as a primary care physician, nurse practitioner, or even a physician's assistant to perform ear examinations accurately and efficiently. In a statement issued last week, PhotoniCare co-founder and CEO Ryan Shelton said that, in developing TOMiScope, the company wanted "to solve the massive problem of frequent misdiagnosis of middle ear infections, and the overuse of antibiotics and referrals to surgery in children that result." The company says it believes that early and objective screenings for middle ear infections are an integral part of delivering better care.

Dr. Michael Pichichero, a pediatrician and pediatric infectious disease specialist who serves as the director of the Rochester General Research Institute and is also a member of PhotoniCare's medical advisory committee, agrees. "If we can improve the assessment of the eardrum and what's behind the eardrum, the consequences for the child are very favorable because as we improve in our assessment, that tells you whether you need an antibiotic or not," Dr. Pichichero tells Romper.

Because the TOMiScope is such a new technology, there is limited independent, third-party comment available at the moment. Now that the device has received its 510(k) clearance from the FDA, however, PhotoniCare expects to immediately launch the device in a limited release with a full nationwide launch expected sometime later this year.