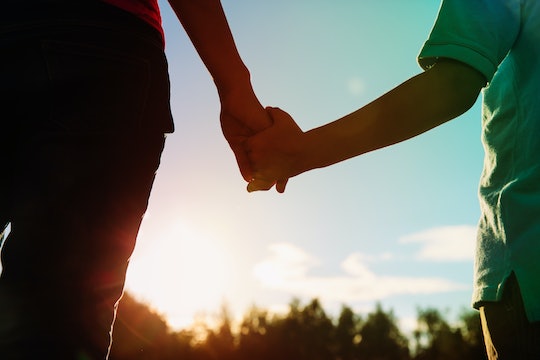 Those who struggle with anxiety know all too well how difficult day-to-day life can be. But for a little kid who can't articulate how or why he is feeling a certain way? Living with anxiety can be especially brutal. Not to mention frustrating for parents, who naturally want to comfort their anxious child. However, this new treatment for childhood anxiety focuses on parents instead of kids. And honestly, the approach makes a lot of sense.

The experimental program at Yale University is called Supportive Parenting for Anxious Childhood Emotions — or SPACE — according to a news release from the university. The idea is to train the caregivers in an anxious child's life, so that they're better prepared to assist that child in working through it themselves.

“The parent’s own responses are a core and integral part of childhood anxiety,” Eli Lebowitz, a psychologist at the Yale School of Medicine who developed the training, told NPR.

Instead of accommodating — or comforting — when a child is anxious, SPACE makes parents aware that this can actually increase kid's anxiety, instead of helping it, and the program aims to teach parents alternative ways to respond through counseling sessions. For example, according to the Yale press release, a parent in the program who usually sent their child "dozens of text messages a day" has tapered down the amount to just "two or three."

“When you provide a lot of accommodation, the unspoken message is, ‘You can’t do this, so I’m going to help you,’” Lebowitz told NPR.

The results of this study — which were published in the Journal of the American Academy of Child & Adolescent Psychiatry — are actually pretty impressive.

In total, there were 124 children (ages 7 to 14) and their parents where were involved in the study. According to the study, the kids were randomly assigned to one of two groups: One group of kids underwent cognitive behavioral therapy, which is the traditional method of treating anxiety, and in the other group, only the parents completed the 12-week training program.

Of the 64 kids whose parents went through the SPACE training, nearly 70 percent reported no anxiety by the end of the stud, according to KQED. "It is amazing. It is really exciting," Lebowitz told NPR. "These children had never met a therapist and were as likely to be cured of their anxiety disorder as the children who had 12 sessions of the best therapy available."

This research is important, considering one in eight children in the U.S. struggles with an anxiety disorder, according to the Anxiety and Depression Association of America. And if left untreated, the consequences can be severe. (Think poor school performance, missing out on important social experiences, and being at risk for engaging in substance abuse.) Still, more research is needed to determine if treatment similar to SPACE could potentially replace — or be used in conjunction with — cognitive behavioral therapy.

As someone who has depression with anxiety, I can attest that coping is an ongoing battle. However, as an adult I'm aware of what triggers my anxiety. (I make sure to take my medication, but I know it's probably something I'll always struggle with.) It's a whole other ballgame for kids; they simply don't have that level of self-awareness yet.

To be honest, I have a feeling one of my kids might already take after me in the anxiety department. So research like this helpful for me to keep in mind. Because even if my knee-jerk reaction would be to accommodate her anxieties as she gets older, supporting her in trying to face them could be more beneficial in the long run.