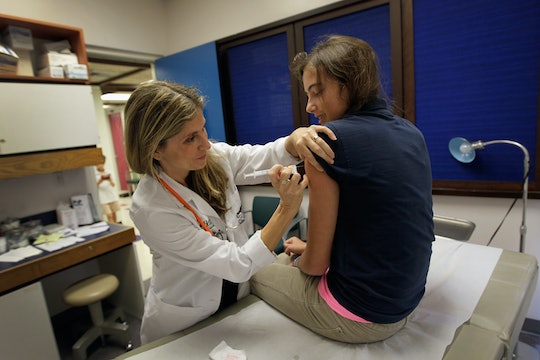 Vaccine safety has long been a hot-button issue for many parents. Although the 1998 study by doctor/researcher Andrew Wakefield which first established a link between vaccines and autism has been thoroughly debunked (Wakefield even lost his medical license in the UK over it), the wave of vaccine skeptics it inspired remains strong, and there is certainly no shortage of scary-sounding information about "vaccine injuries" floating around the internet for anyone who wants to Google it. Lack of trust in vaccines in America has led to outbreaks of previously rare diseases like whooping cough and measles — particularly in areas where vaccination rates are low — but a new vaccination confidence survey that looked at the way different countries view vaccines shows that in some European countries, fears about vaccine safety is an even bigger issue than it is in the United States.

The study, led by the Vaccine Confidence Project at the London School of Hygiene & Tropical Medicine and published in EBioMedicine, included data from 65,819 around the world, including "a sample of around 500 men and 500 women interviewed either face-to-face in each country, via telephone or online." From their answers, researchers found that several countries in Europe were found to have low confidence in vaccine safety and were actually more skeptical of vaccines than the United States. The country with the least amount of public trust in immunization, according to the survey? France, where a whopping 41 percent of survey participants said they did not agree that vaccines were safe or important.

But France certainly wasn't the only country in Europe generally distrustful of vaccines. In Bosnia and Herzegovina, 36 percent of respondents said they didn't think vaccines were safe, and in both Greece and the Ukraine, 25 percent identified as feeling distrustful of vaccines. In a variation on the question, 15 percent of respondents in Italy and 13 percent in Slovenia reported that they didn't even consider vaccines to be important. Perhaps unsurprisingly then, as a region, Europe had the lowest rates of confidence in vaccine safety, at only 15.8 percent.

Other countries, too, reported a lukewarm belief in the value and safety of vaccines: over a quarter of respondents in both Russia and Mongolia reported feeling that vaccines are unsafe, along with 25 percent in Japan, and 14 percent of respondents in both China and Azerbaijan felt vaccines were unimportant. But perhaps the most striking finding was how these findings stood in contrast to a number of other countries around the world, who reported very high levels of confidence in vaccines, as well as overwhelmingly considering them to the be important and valuable.

The country found to be the most confident in vaccines globally? Bangladesh, where less than 1 percent of all individuals surveyed felt that vaccines were unsafe or not important. Iran also had similar results, as did Ecuador, Philippines, Saudi Arabia, and Argentina. The study also found that, older individuals (aged 65 and older) tended to have a much more favorable view of vaccines, regardless of location.

So what's behind this global divide? Anthropologist Heidi Larson, who led the study, told Science that France in particular has grappled with the debate over whether certain vaccines have been linked to serious side effects, like multiple sclerosis (linked to the Hepatitis B vaccine), or extreme fatigue and fibromyalgia (linked to the HPV vaccine). Although routine vaccinations are mandatory in France for things like school attendance, many parents have argued that the laws violate their right to keep their children safe. According to The Guardian, in 2014 French parents Samia and Marc Larère received a two-month jail sentence for choosing not to immunize their children over fears of additives and toxins in the vaccines themselves (they have since appealed the case with the country's highest court, the cour de cassation). And, as Larson told Vox, many people in France feel supportive of things like homeopathy and alternative medicine, so much so that pharmacies often have sections devoted to those products alongside conventional drugs.

In countries like Bangladesh though, where vaccine trust is very high, Larson told Vox that it's likely because the threat of the diseases vaccines are designed to treat is much more acute:

People in these countries have other reasons for being more confident in vaccines. It’s something they feel there’s some value in for their children’s health, because they face these diseases.

Unlike in the United States, children in countries like Bangladesh, Pakistan, and India are much more likely to die from rotavirus (which causes severe diarrhea), or other diseases, like cholera. And even though the actual success rates of the vaccines for those diseases isn't particularly great (about 43 percent effective for preventing rotavirus for children in Bangladesh, versus 98 percent effective for children in the United States), the staggering numbers of children at risk of death each year from rotavirus means than tens of thousands of lives are saved as a result of the vaccine, according to CNN. And while many children in Asia and Africa do still go unvaccinated, the reasons why are much different from those of unvaccinated children in developed countries. According to UNICEF, the lack of available or effective vaccines, as well as lack of access to quality healthcare are major contributors to the number of children who die of vaccine-preventable illnesses in developing countries each year.

Of course, the continued lack of confidence in vaccines in developed countries also means that the death from vaccine-preventable illness will inevitably become a bigger problem here, too. In 2015, a "large, multi-state measles outbreak" was traced back to Disneyland in California, according to the Centers for Disease Control, and according to NBC News, France had over 23,000 cases of measles between 2010-2015. But in other European countries, like Bulgaria and Portugal, continued high rates of vaccination have meant that the disease has been essentially eliminated — neither country reported any measles cases at all in 2014.

What's clear from the study though is that, regardless of the overwhelming scientific support, many people are indeed very worried about vaccines — and that, if vaccinations programs are going to be successful, they'll probably need to go far beyond the message that "your doctor says it's good for you." Although some countries have imposed stricter laws to try and ensure parents are indeed having their children vaccinated, it seems that perhaps greater adherence to routine vaccination schedules might actually lie in the ability to build more trust around those decisions — especially given the prevalence of anti-vaxx information online not at all rooted in science. After all, so long as parents feel they have legitimate reason to worry about the safety of vaccines, it seems inevitable that declining immunization rates are only going to continue.