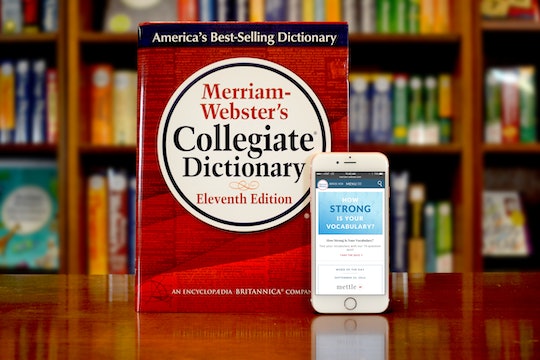 Have you seen that new buzzy movie or met someone who was totally swole? If you're not sure what those words mean, it's time to look things up — dictionary style. The lexinographers at Merriam-Webster have been pouring over thousands of new words, analzying each one for importance and meaning. From terms describing sexuality and political phrases, to pop culture and internet related expressions, the world's leading wordsmiths have come to a lengthy conclusion. These new words added to the Merriam-Webster dictionary, including screen time and 640 more, have become part of everyday conversation.

Millennials had a strong influence on the inclusion of a few key words, like stan (to be a super fan), peak (to be at the height of popularity), and on-brand (consistent with a message of identity). Really, these words all apply to social media.

Think influencers who represent clothing companies. Their posts are always on-brand. And when they get that little blue check mark by their name or reach a certain number of followers, then they've peaked. Their popularity might make them the object of stanning. Who wouldn't want to be the best dressed, most liked person on Insta?

Some of the words were already part of the dictionary, but have been updated to reflect current usage. Take for instance snowflake. Literally it's a piece of snow, but in today's lexicon it can also be a highly sensitive person, according to CBS News.

There is also unplug and screen time - two words that have meanings related to electronic devices. Prior to their new definitions they were used in regards to electrical currents and entertainment, respectively.

Ongoing social discussions about sexuality helped with the addition of these words, especially gender non-conforming, top surgery, and bottom surgery, according to a statement from Merriam-Webster.

So how are new words chosen for inclusion in America's most popular disctionary? It's a long process, according to Peter Sokolowski, editor at large for Merriam Webster.

About two dozen lexicographers read through journals, papers, magazines, blogs, internet posts and more to find what he calls a "critical mass," of word usage, according to the Associated Press.

"So many people use our website as their principal dictionary and we want it to be current," Sokolowski said, according to the Associated Press. "We want to be as useful as possible. We need the dictionary more than ever now that we have information flying at us from all directions."

Words are always updated online first, then in print later.

The is the second biggest list of new words since last fall, when Merriam-Webster added 840 words including things like GOAT (greatest of all time) and marg (short for margarita), according to The Los Angeles Times.

So, how many of these new words can you use in a sentence? Better get to it, because if the good people at Merriam-Webster deem them important enough for inclusion, you'll want to brush up on your definitions.