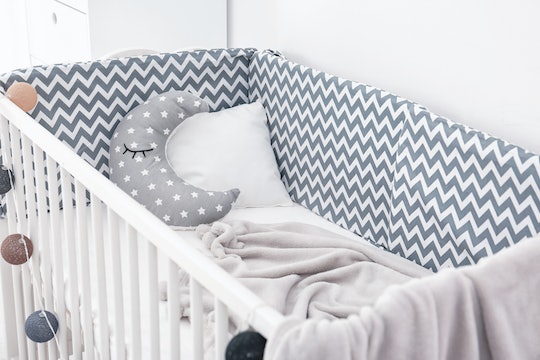 It wasn't until I was pregnant with my first child that I realized how dangerous crib bumpers can be. Recommendations from the American Academy of Pediatrics (AAP) taught me, however, to put my baby to sleep on his back, on a firm mattress, and with nothing else whatsoever in the crib. This is the best way to prevent sudden infant death syndrome (SIDS), in addition to accidental suffocation. My baby's pediatrician echoed these same instructions, so that's exactly what I did. But one state is taking infant safety to the next level. Case in point: On Tuesday, Aug. 13, New York state banned crib bumper pads.

New York Gov. Andrew Cuomo recently signed a package of bills aiming to keep babies and young children safe, and among these brand new laws is a ban on the sale of crib bumpers. This means stores will no longer be permitted to sell crib bumpers in the state of New York, according to the New York Daily News.

If you're not too familiar with bumpers, these items are often used with the intent of cushioning babies from hitting their heads or sticking their arms/legs through slatted sides of a crib. Oftentimes, they are sold as part of bedding sets, and complement the aesthetic of a nursery.

Although parents have good intentions by using these bumpers, babies can fall asleep with their noses or mouths near the bumper, suffocating as a result. And this is exactly why the AAP recommends against using them. "Keep soft objects, loose bedding, or any objects that could increase the risk of entrapment, suffocation, or strangulation out of the baby's sleep area," the AAP's website reads. "These include pillows, quilts, comforters, sheepskins, blankets, toys, bumper pads or similar products that attach to crib slats or sides."

All of these laws make sense, considering tip-over deaths have been on the rise in recent years, according to People. In fact, a tip-over injury involving a TV, a piece of furniture, or an appliance happens every 17 minutes in the U.S., according to Consumer Reports. What's more? There were 195 reported deaths caused by tip-overs between 2000 and 2016.

Cuomo, a father himself, addressed these risks in a statement about the recently approved measures.

“As a father, I know full well that you never stop worrying about your child’s safety, no matter how old they are,” he said, according to the New York Daily News. “These measures will help give parents peace of mind at a critical time in their child’s lives and will help ensure that their homes or daycare facilities remain safe and secure environments.”

Of the new measures, Senate Majority Leader Andrea Stewart-Cousins said, "Parents deserve to know their children are safe, whether it be in their cribs, in their rooms, or in their daycare centers."

As a mom of four, I'm loving these new laws in the state of New York, and I'd love to see more states get behind similar measures because a few simple precautions could mean the difference between life and death.

More Like This
My Toddler Ate Play-Doh, What Happens Now? Don’t Freak Out
The 16 Best Subscription Boxes For Every Kind Of Kid
Over 10,000 Sippy Cups & Bottles For Toddlers Recalled Due To Lead Poisoning Hazard
Why Do Toddlers Line Up Toys? Experts Explain This Classic Toddler Behavior