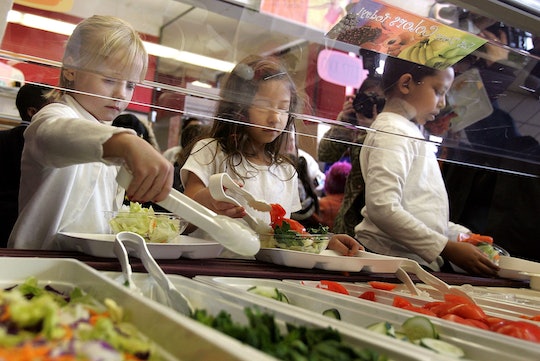 Starting on Thursday, the first day of school, New York City public schools will provide free lunch to all students. About 75 percent of the city's 1.1 million students already qualified for free lunch based on household income, according to the New York Times, and the new policy will save families about $300 per year per child. The city has been offering free breakfast in schools since 2003, and in order to improve access, schools began serving breakfast right in the classrooms in 2015.

Besides the obvious health consequences, poor nutrition can have a detrimental effect on kids' school performance. A 2001 Journal of Pediatrics study found that food-insufficient children had "significantly lower arithmetic scores," and were more likely to repeat a grade, be suspended, and have trouble getting along with other kids. A 2005 study published in The Journal of Nutrition concurred with those findings, and also found an association between food insecurity and "absenteeism, tardiness, visits to a psychologist, anxiety, aggression, psychosocial dysfunction." According to the U.S. Department of Agriculture, 8 percent of kids nationwide experience food insecurity. In New York City, that number jumps to 22.3 percent, affecting nearly 400,000 children, according to Food Bank For New York City.

Since the early 1930s, the federal government has provided subsidies to public schools so that kids who can't afford lunch won't go without. But in order to qualify for free or reduced-price lunch, parents must show proof of income to the school, and some may not feel comfortable with that. Kids can also feel the stigma of being less well-off than their peers. Speaking at a New York elementary school on Wednesday following the announcement of the new program, Councilman Ben Kallos said he qualified for reduced-price lunch as a child, but he was too embarrassed to take it, so he went hungry at school. "I had to choose between friends and food," he said, according to the Times. Thanks to the new universal free lunch policy, New York City students will no longer feel they have to make that choice.

Providing free lunch for all students eliminates the unintended consequence of singling out the poorest among them, which can come with its own set of harmful social repercussions. Thanks to the Healthy, Hunger-Free Kids Act of 2010, schools are no longer required to identify specific needy students in order to qualify for lunch subsidies; eligibility can now be determined based on the needs of the community as a whole, according to MSNBC. Several U.S. cities already provide universal free lunch in public schools, including Boston, Chicago, Dallas, Philadelphia, Detroit and Washington, D.C., according to Fox Business. Let's hope that more follow.