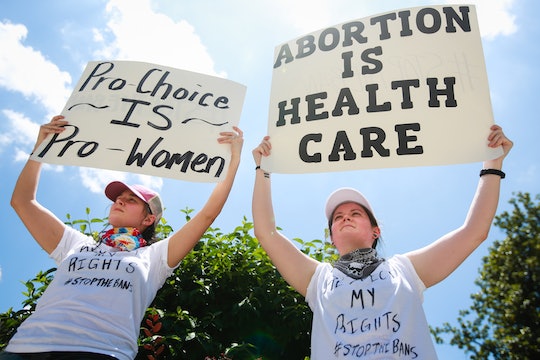 New York City To Fund Abortions For Those From Other States

There's been a lot of disturbing news about states levying heavy restrictions on abortions, with some even issuing bans as early as six weeks into a pregnancy. In all, nine states have effectively banned abortions through the passage of bills, with Alabama's being the worst of all. But, there is some good news from the state of New York, which has stepped up on this year's all-out attack on a woman's right to choose. New York City is becoming the first to fund abortions for those from other states and it's a historic step in the right direction.

The city has allocated $250,000 in the 2020 New York City budget for funding to the New York Abortion Access Fund (NYAAF), according to the New York Times. The funding would allow about 500 women who would otherwise not be able to afford abortion services, either through lack of insurance or medicare, to receive one.

The historic announcement is the result of a hard fought campaign, #FundAbortionNYC, that lobbied City Council for the funds, according to Allure.

This is the first time the non-profit, NYAAF, has received city funding, and the first time a city has provided public funds earmarked specifically for abortion care. While this might seem like a small amount of money, it serves as a big statement resisting the harsh changes that other states are adopting to make abortions harder to obtain.

“There haven’t been that many city and state public officials to say we should publicly fund abortions. It’s a big statement,” Aziza Ahmed, a law professor at Northeastern University in Boston told the New York Times. “This is a culture war to some degree.”

One-third of the budget will be allocated to women who can't access abortions in their own state and must seek a safe abortion in New York City, according to Scary Mommy.

“As it gets harder for people to access abortion in conservative states, NYC will likely see an increase in out-of-state folks seeking abortion,” NYAAF said in a statement. “This city funding means NYAAF will be better equipped to keep up with the increasing demand and to continue building a movement to lift barriers to abortion access here in New York and across the country.”

So how will it work? Anyone who is unable to pay for their abortion can call NYAAF and someone will contact them within 24 hours. They assess the situation, then work with your clinic of choice within the New York City limit to pay for the bills directly, according to Jezebel. While they do not cover transportation or lodging, they can direct you to organizations that can help.

This isn't the first time New York has taken a stand in the face of recent attacks on reproductive health. On the 46th anniversary of the historic Roe vs. Wade court case that made abortion legal in all states, Governor Andrew Cuomo signed the Reproductive Health Law, according to The New York State Senate. It allows for medical professionals, not just doctors, to perform abortions. It also allows for women to receive an abortion after 24 weeks if a mother's life is in danger or if the fetus is not viable.

This brave act by New York City is a sign of hope for the future of reproductive rights, as so many other states work against safe and legal abortion options. There's no telling what the road leading to the 2020 presidential election will bring, but it's a sure bet that abortion rights will a major topic.