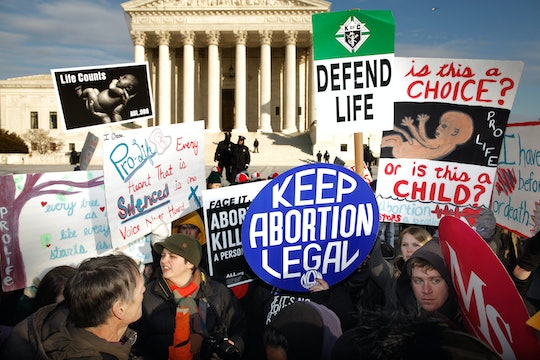 Abortion rights have been at the forefront of political campaigns for years, particularly during the 2018 midterm elections and the upcoming elections in 2020. But it looks like a handful of states are willing to make changes to existing laws to bring them up to date with current events. In a groundbreaking and unprecedented event, New York passed a new abortion law — and it's pretty controversial. The new law will allow women to seek out an abortion well over the previously allowed 24-week mark, if her health is in danger.

The law is called the Reproductive Health Act, and it replaces a state law that had been passed three years before Roe v. Wade legalized abortion nationwide, according to CBS News.

This week marks the 46th anniversary of Roe v. Wade, the landmark court case that secured lawful abortions for women. And the RHA law, signed by Governor Andrew Cuomo as part of his campaign promise, is meant to enact stronger legislation for abortion rights — ones that will bring the protections of Roe vs. Wade to the state level, according to the ACLU.

If Roe v. Wade is ever overturned, state law will still hold its ground, making this law more important than ever as Roe v. Wade continues to be a contentious topic of both sides of the aisle, according to the Associated Press.

Here's a breakdown of what the new law includes and how it intends to fix New York's outdated abortion laws, according to the ACLU:

Additionally, CBS News reported that the RHA also enables women to seek an abortion anywhere from conception to birth if her health is in danger. Before, a woman could only seek an abortion past 24 weeks if her life was in danger. That particular component of the bill has already proven to be controversial, with opponents concerned about an uptick in late-term abortions.

However it is important to note that the majority of abortions happen during the first trimester, with less than ten percent occurring past 14 weeks, according to the Guttmacher Institute.

New York is not alone in moving to protect abortion rights at the state level, if Roe is overturned. California, Oregon, Washington, and others have added similar protections within its state statute as a preemptive measure, according to the Associated Press.

The Democratic takeover of the state Assembly and Senate made these bills easy to pass, according to the Associated Press.

"We have a president who has made it very, very clear that he wants to overturn Roe v. Wade," Andrea Stewart-Cousins (D) of Yonkers, the Senate's new leader, said in a statement. "Today in New York we are saying 'No. Not here in New York.'"

And while New York might be taking major strides in a women's right to choose, other states are trying to restrict access to safe abortions. A state legislator recently introduced legislation that would make abortion a felony. If a heartbeat is detected and an abortion is performed, it can be met with a felony charge and up to five years in prison, according to The Hill.

Abortion rights will always be at the forefront of political fights, no matter what political climate this nation faces. But, the needs and health of women must be accounted for in the years to come. Here's hoping that Congress and state legislators keep women's best interests in mind.