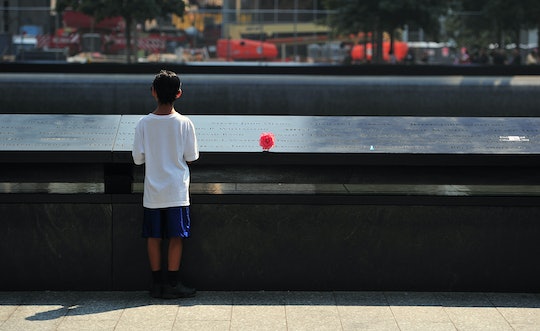 Although they may not have been alive to witness the attacks firsthand, New York school kids will now remember 9/11 by observing a moment of silence on each anniversary, thanks to a law recently signed by Gov. Andrew Cuomo. Designed to encourage education and discussion about the terrorist attacks that targeted New York in 2001, Cuomo and other state legislators hope the new law will ensure that future generations of New Yorkers grow up to have a deep understanding of the day's events and their historical importance.

"[September 11th] was one of the single darkest periods in this state's and this nation's history, and we owe it to those we lost and to the countless heroes who ran toward danger that day and the days that followed to do everything we can to keep their memory alive," Cuomo said in a statement released by his office. "By establishing this annual day of remembrance and a brief moment of silence in public schools, we will help ensure we never forget — not just the pain of that moment but of the courage, sacrifice and outpouring of love that defined our response."

Legislators behind the law have said that they hope it will help to preserve the significance behind remembering 9/11 as children old enough to have witnessed the attacks age out of the school system. "Students graduating from high school as part of the Class of 2019 were just newborns during the terrorists attacks of September 11, 2001, and soon enough there will be no students in the national public school system born at the time of 9/11," Amato said in a statement. "By mandating a brief moment of silent reflection every year, we may ensure that future generations will better understand this day and its significance in our history."

In a statement of his own, state Sen. Addabbo said he was "hopeful" that the law "will mean that the significance of the tragic events of September 11th, whether it be the loss of loved ones or the largest rescue operation our nation ever witnessed, will be forever acknowledged by school students too young to have witnessed this life-changing day."

A total of 2,977 people were killed in a series of four terrorist attacks coordinated and carried out by al-Qaeda on Sept. 11, 2001, in New York City, Washington, D.C. and the outskirts of Shanksville, Pennsylvania, according to CNN. In New York City alone, 2,753 people, including 23 police officers, 37 port authority officers, and 343 firefighters and paramedics, were killed when two commercial airplanes struck The World Trade Center's twin towers.

According to Gov. Cuomo's office, the law goes into effect immediately, meaning this will be the first year that New York public schools will be required to mark the anniversary of the September 11th attacks by observing a mandatory moment of silence to ensure the lives lost 18 years ago are never forgotten.