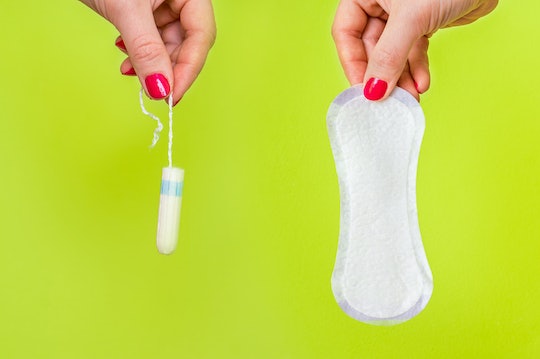 By now, basically everyone is aware of the "tampon tax." As frustrating as it is that a basic necessity is typically taxed as a luxury good, there are measures being taken in certain parts of the country to alleviate that. Now, New York public schools will provide free menstrual products for young girls and it's definitely a step toward progress. As Babble reported, all public middle and high schools in the state of New York are now required to provide girls with feminine hygiene products in the schools' restrooms.

If you're a girl, you'll remember when you got your period. Maybe you were embarrassed or too shy to ask for help or the products you needed, or maybe your family couldn't afford them. Whatever the case, getting your period can be an intense and sometimes painful experience, so the fact that many young girls can't get access to sanitary products is a real issue. And that's something that New York Gov. Andrew Cuomo touched on in his tweet, as well as the press release announcing the Federal Year budget for 2019, which is where the menstrual products will fit in.

"Schools in New York State will now be required to provide free menstrual products in restrooms for girls in grades 6 through 12," he wrote on Twitter on Tuesday, April 2. "Menstrual products are as necessary as toilet paper and soap, but can be one expense too many for struggling families."

This latest news adds to some of New York's other recent legislative decisions to alleviate this financial burden placed on women, young girls, and their families. In 2016, for example, it eliminated the tax on tampons and other menstrual products sold within the state, becoming just the eleventh state to do so, as Newsweek reported. And the buzz surrounding the state's latest measure surrounding tampons and other feminine hygiene products has been around for weeks now, with some publications reporting on the possibility of it happening back in January of this year, according to The Observer. And now it's a reality.

When the measure was first announced, it was already pretty popular among politicians. "No student should miss a day of school or feel ashamed because they don’t have access to tampons or pad," Assemblywoman Linda Rosenthal told Democrat & Chronicle at the time. According to HuffPost, the average woman will spend about $1,773.33 over the course of her lifetime just on tampons. Women who also use panty liners spend $443.33 more during their life. Truly, those costs are extreme and can often be a burden on low-income families.

What's more, research has proven that the very act of having to go through so much trouble to just acquire a tampon or pad is very distressing for young girls. According to the organization, Free The Tampon, which advocates for wide and free access to sanitary products for anyone who menstruates, the cost of not having products at a young person's disposal is way too much:

Advocates say having to jump through hoops for menstrual care can be traumatizing, especially for the 21 percent of school-age children living in poverty.

Additionally, Free The Tampon also found that those students who don't have simple and easy access to menstrual products face a slew of challenges, including being unable to focus in class and they also "risk bleeding through their underwear, and are forced to miss class or school altogether, falling behind on lessons and grades." This is all in contrast to students who don't have periods or can simply go to the bathroom when they need and be provided with these basic necessities, Free The Tampon argues.

And that's something that the official press release from the governor's office touched on as well. "This important step will make New York State a leader in addressing this issue of inequality and stigma, ensuring that no girl's learning is hindered by lack of access to the products her biology demands," the statement read in part.

These new changes in New York state are certainly a step in the right direction and will hopefully inspire other states across the nation to do the same.