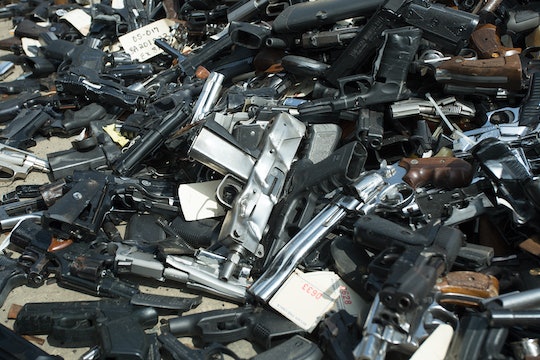 For the first time since 1920, The New York Times is running an editorial on Page One, calling for an end to the “gun epidemic.” The New York Time's op-ed about gun control is a bold move and big first step to making gun control a central issue. The piece calls for the regulation and reform of the Second Amendment as the country’s been recovering from three mass shootings just this week. Arthur Sulzberger Jr., the publisher of the paper, wrote in a statement that:

Even in this digital age, the front page remains an incredibly strong and powerful way to surface issues that demand attention. And, what issue is more important than our nation’s failure to protect its citizens?

The last time the Times ran an editorial on the front page was to call attention to the candidacy of Warren G. Harding. And Harding is known as one of the worst presidents in American history. No matter where you come down on the paper of record, they weren’t wrong last time. The piece, titled “End the Gun Epidemic in America” is brief, but makes some powerful points about the issues and why we need to stop quibbling over the wording of our gun laws and get down to actually changing them.

Oddly, the Times was inspired by another New York paper, the Daily News, which has a reputation for exaggeration and "punny" headlines. But after the San Bernardino shooting this week, the Daily News got serious and dedicated an entire issue with the headline: “God Isn’t Fixing This.” They collected tweets from politicians offering prayers for the victims of gun violence and made it very clear where they stood: the gun problem in America isn’t going away. The Times editorial board makes the very same point — it’s time for real action. Some of their points:

Calling A Spade A Spade

It is a moral outrage and a national disgrace that civilians can legally purchase weapons designed specifically to kill people with brutal speed and efficiency. These are weapons of war, barely modified and deliberately marketed as tools of macho vigilantism and even insurrection.

We Need To Try Harder

[Opponents of gun control] point out that determined killers obtained weapons illegally in places like France, England and Norway that have strict gun laws. Yes, they did. But at least those countries are trying. The United States is not. Worse, politicians abet would-be killers by creating gun markets for them, and voters allow those politicians to keep their jobs.

Certain kinds of weapons, like the slightly modified combat rifles used in California, and certain kinds of ammunition, must be outlawed for civilian ownership. It is possible to define those guns in a clear and effective way and, yes, it would require Americans who own those kinds of weapons to give them up for the good of their fellow citizens.

If two (very different) newspapers think it's about time to start getting serious about gun control, it might be worth continuing the conversation. Whatever we've been doing hasn't been working.