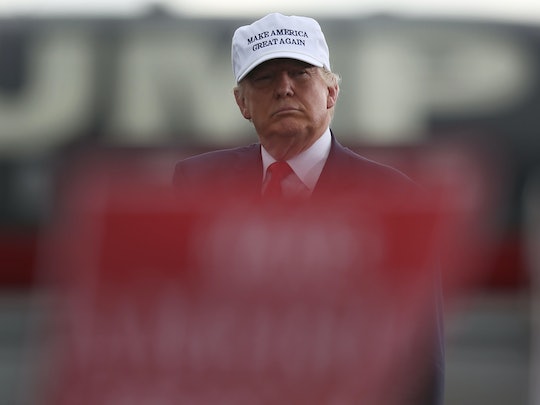 Irked by claims they'd like to dispute as libelous, GOP presidential nominee Donald Trump and his lawyer have requested that The New York Times remove its article "Two Women Say Donald Trump Touched Them Inappropriately" from its website and release an additional apology. A New York Times lawyer responded to Donald Trump's attorney, though, making an absolutely valid claim. In a now highly-circulated letter to Trump's attorney, Times lawyer David McCraw wrote that "nothing in [the] article has had the slightest effect on the reputation that Mr. Trump, through his words and actions, has already created for himself," serving the ultimate mic drop.

McCraw reminded Trump's lawyer that "the essence of a libel claim... is the protection of one's reputation." Though The Times' article definitely hints at Trump's character, it's been on multiple records that "Trump has bragged about his non-consensual sexual touching of women," along with so many other inappropriate forms of alleged unwanted sexual behavior. The two women who shared their alleged experiences with The Times didn't engender all of this Trump-and-unwanted-sexual-aggression chatter; In fact, Trump's own words started the conversation.

The Times' original story of two specific instances of alleged unwanted sexual advances appeared to open the floodgates as the amount of women who claim Trump has sexually assaulted them continues to build. The creation of an environment of comfort where women feel that they'll be heard appears to be causing this seemingly sudden influx of personal accounts. Romper has reached out to the Trump campaign for further comment on the new flood of allegations, and is awaiting a response.

Believing that illuminating these stories leads to justice, McCraw concluded: "It would have been a disservice not just to our readers but to democracy itself to silence their voices." He then countered Trump's lawyers with an invitation to court:

If Mr. Trump agrees, if he believes that American citizens have no right to hear what these women had to say and that the law of this country forces us and those who would dare criticize him to stand silent or be punished, we welcome the opportunity to have a court set him straight.

A Trump vs. Times lawsuit would likely not bode well for Trump, as the tone of McCraw's letter. To claim that the paper was damaging his reputation rather than Trump's own disgusting remarks made in 2005 — the very least of which included "when you’re a star, they let you do it... You can do anything," — is short-sighted.

It's impossible to say how deeply the Trump campaign's delusions run, but time is running out for the Republican nominee to try and prove his political relevance. (Mic drop.)