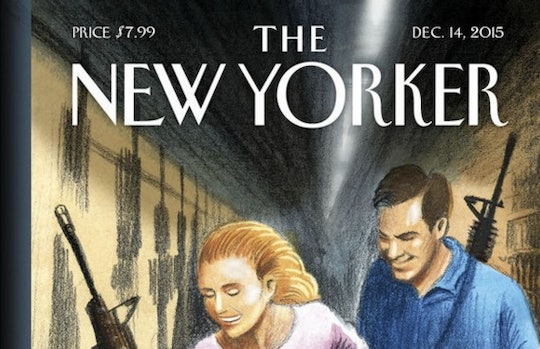 Earlier today, Nicholas Thompson, editor of NewYorker.com, tweeted an image of the rather controversial cover of the next issue of The New Yorker — and it's one that'll likely fan the flame of the ongoing gun control debate in America. The cover depicts a man and woman happily grocery shopping together, with list in their hands, and milk, grenades, and many, many guns in their shopping cart. See it for yourself below.

If you're outraged, if you're confused, if you're annoyed, if you're uncomfortable — well that's the point. Although the depiction, of course, doesn't represent the typical American grocery shopping experience, the truth isn't so far away, and it's easy to see that artist Eric Drooker's illustration is a means of communicating just how ridiculously easy it is for people to buy guns in our country. It's become as commonplace as shopping for your groceries.

As we all know, it's our right as citizens of the United States to bear arms. It's in the Constitution, after all. However, as we've come to find time and time again, guns often land in the wrong hands. Lately it seems like guns find their way into the wrong hands all too easily. Over the past decade, mass shootings have become disturbingly common — the latest, in San Bernardino, resulted in the death of 14 people and at least 21 more injured. And as The Washington Post recently reported, according to ShootingTracker.com, there have been 355 mass shootings over the course of 336 days.

The New Yorker cover's argument isn't exactly new — gun violence and gun control has been a hot-button issue all throughout the 2016 election cycle — but the point the cover makes is still valid. To be totally honest, it's still one we need to hear. (And one we need to continue hearing, time and time again, until changes are made.) Gun violence is a problem. Gun control is a problem. We've gotten to the point where those to sentiments are so redundant but still so wholly appropriate. In a way, it's fascinating that the point still needs to be made, but I'll happily make it again until someone listens: It's much, much too easy to buy guns in our country, and the result isn't just increased revenue for gunmakers. It's increased fatalities.

We put our elected officials in office with one job in mind: to represent and care for their constituents. So how can they not all hear the harmonious screams from the people they represent? Guns are a problem, and we need to stop it.

In August of 2015, Forbes published an article that asserted that more young people die from guns today than they do from car accidents. Which is — obviously — terrifying. There was once a time when we all probably listed the uncommon, rare, situations that scared us most (car crashes, freak accidents, asteroids, natural disasters), but our lists never involved walking into a public healthcare facility, a community college, a place of worship, or a center that provides care and services for developmentally disabled individuals and losing our lives.

America has changed, and along with it, so has our fear. What the New Yorker reveals so vividly is our worst nightmare come to life: Dangerous people can walk into a store and pick out a gun as casually as they choose which milk to buy. It can be done on a Saturday morning. On a Friday night. On a Tuesday at noon, right smack in the middle of the lunch rush. Of course, there are responsible, smart gun owners who take care and consideration when buying, keeping, and caring for their firearms. But there are also individuals who walk into a store, pick out a gun, purchase an outrageous amount of weaponry with only one goal in mind: to harm others. For them that purchase is almost as easy as picking up an extra gallon of milk.

And that is absolutely horrifying.

So before we finger-point at the New Yorker for waging yet another round of fear mongering, maybe we should consider paying attention to the message: Do we want to live in a country where purchasing a gun is a simple as picking up a dozen eggs? Or do we want to make it even a bit more complicated, even a touch more involved?

The decision seems pretty simple at this point.