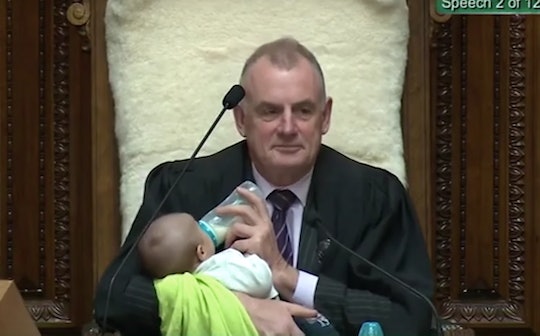 When This Lawmaker Brought His Baby To Work, New Zealand's Speaker Lent A Hand

Balancing work life and home life can be tricky, especially soon after welcoming a new baby into the mix. But when you have supportive workplace, and one that's also willing to lend a hand, it's certainly a whole lot easier. For example, in what was a truly adorable moment on the parliamentary floor, a New Zealand lawmaker brought his newborn baby to work after he'd finished his paternity leave. And making matters even more heartwarming, the House Speaker held and fed the cutie while he oversaw a debate, sending a really powerful message in the process.

Earlier this week, while New Zealand's parliamentary speaker, Trevor Mallard, led a debate, he had a tiny and cute guest nestled in his arms. Lawmaker Tāmati Coffey had come back to work after finishing his paternity leave, according to CNN, and upon his return, he also delivered his first debate. As Coffey gave his remarks, Mallard, a father of three himself, held his newborn son during a debate and fed him a bottle.

"Normally the Speaker’s chair is only used by Presiding Officers but today a VIP took the chair with me," Mallard wrote on Twitter. "Congratulations @tamaticoffey and Tim on the newest member of your family." Coffey his partner, Tim Smith, welcomed their baby boy via surrogate earlier this summer, according to Global News.

The timing of this important and sweet moment is undoubtedly apt. Just earlier this month, Kenyan lawmaker Zuleikha Hassan was asked to leave parliament after bringing her child to work when she did not have childcare, as The Guardian reported at the time, adding that several legislators followed her lead and also exited when she was asked.

Of course, it should go without saying that no matter where, or for whom, you work, having reliable and consistent childcare is a privilege for many. Though the United States is making strides on that front, there's still a ways to go. Only five states currently mandate paid parental leave, according to Fatherly, and the only federal protection for American fathers is the FMLA, or Family and Medical Leave Act, which ensures that new parents can take up to 12 weeks of unpaid leave without threat of job loss.

However, it should be emphasized that the caveat is "unpaid," which is, of course, completely unrealistic for most families. It seems that expectations need to shift away from the workplace taking precedence over any and all other priorities. Many on seem to Twitter agree, and supported Mallard's lovely moment with the baby.

"New Zealand... you might be a small country, but you have a huge lesson to teach the world! Great photo!" one user replied to his post.

"They have been teaching the world lessons for many years. NZ was the first country in the modern world to have equal suffrage for men and women," another chimed.

"Thank you for normalising the family unit. We need to see more of this. Work places need to adapt to enable this behaviour," yet another commented on the photo.

Mallard's decision to babysit his co-worker's newborn baby on such a public platform certainly sent a powerful message — not only in New Zealand, but across the globe.