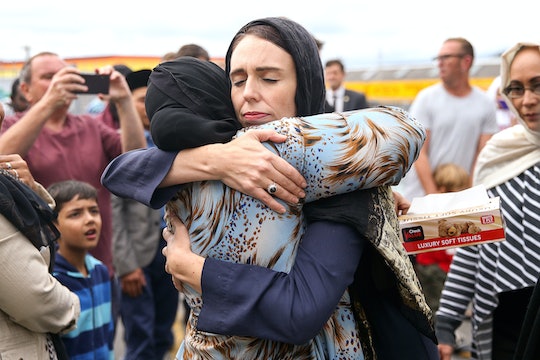 Since taking office in 2017, Jacinda Ardern gained popularity for becoming New Zealand’s youngest leader in 150 years, giving birth in office, and bringing her baby to the United Nation’s General Assembly floor. Many critics have doubted the merit of her celebrity status on account of her youth and brazen optimism. But New Zealand Prime Minister Jacinda Ardern’s message in light of the worst massacre in nation’s modern history points to unity and promises change. Her compassion and determination for change in response to the killing of 50 Muslims by a white supremacist last Friday is giving the mourning nation hope.

The 38-year-old leader swiftly condemned the actions of the terrorist, labeling the shooting as a “terrorist attack.”

"We represent diversity, kindness, compassion, a home for those who share our values, refuge for those who need it," she said in a statement during a press conference at the Parliament on Friday, according to CNN. "You may have chosen us — but we utterly reject and condemn you."

Ardern later flew to Christchurch to visit the families of those killed or injured in the attack, wearing a simple black hijab out of respect. "This is not New Zealand," she told Muslim leaders at a refugee center, the AP noted. "The only part of the incident and actions that we have seen over the past 24, 36 hours that is New Zealand is the support that you are seeing now."

Her message of unity didn’t stop at New Zealand’s borders. According to Reuters, Ardern said that when Trump, who said he didn’t see a rise in white nationalism, called her to offer his condolences and ask what support the United States could offer her nation, she said "sympathy and love for all Muslim communities."

But Ardern’s stern display of resolve and unity also gave way to tangible change. In a news conference Sunday, she promised to help families cover funeral costs regardless of their citizenship status, as HuffPost noted. She also promised financial assistant to those who had lost their sole wage-earner in the attack, according to the AP.

She did not shy away from addressing the nation’s gun legislation in the aftermath of the shooting and promised an overhaul of the nation’s liberal gun laws. "I can tell you right now our gun laws will change," she said, according to the AP.

And less than 24 hours after the attack, New Zealand Attorney General David Parker reportedly informed a crowd at a vigil that the government is seeking to ban semi-automatic weapons, per Vox. While he later clarified in a Radio New Zealand interview that the future of the country's gun laws is uncertain, he did point to Ardern's call for reform. "We need to ban some semi-automatics, perhaps all of them. Those decisions have yet to be taken, but the prime minister has signaled that we are going to look at that issue," Parker told Radio New Zealand.

The events that unfolded on Friday have left New Zealand, a small nation of about 5 million celebrated for its natural beauty and relative safety, reeling. Many are reportedly saying, according to The New York Times: "Things like this do not happen here." It seems the nation’s prime minister is working to ensure exactly that.