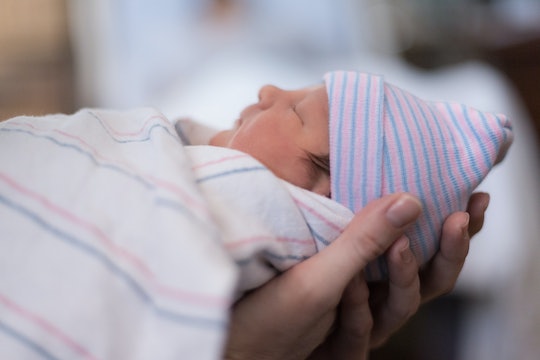 Coming from the comfort and safety of a mother's womb to life outside can be rough. Birth can be hard on a baby's brain, so can the change in blood circulation from mom to neonate. For these reasons, newborns can suffer from strokes and it's fairly common, according to a recent study. But newborns' brains don't respond to strokes in the same way as adults and it's quite remarkable how they're able to recover from them.

Researchers from Georgetown University Medical Center found that at least one in 4,000 babies experience a stroke shortly before, during, or after birth, according to Science Daily. The team, led by cognitive neuroscientist Elissa L. Newport, PhD, professor of neurology at Georgetown University School of Medicine, looked at 12 individuals, between 12 and 25, who suffered strokes as newborns. The researchers determined that between 10 and 20 years after suffering a "perinatal" stroke that damaged the left "language" side of the brain, "affected teenagers and young adults used the right sides of their brain for language," according to the study.

Newport, who is also the director of the Center for Brain Plasticity and Recovery at Georgetown University and MedStar National Rehabilitation Network, told Science Daily that the study revealed how "plastic" brain function is in infants. That is, their brains are more capable of changing and adapting over time. Despite the damage done by the strokes, "their language is good — normal," she said. Cognitive functions in the test subjects were excellent, though other signs of brain damage such as limps and limited hand function on the affected side remained.

The reason that the subjects' brains were able to adapt so well was because they were still developing at the time of the stroke, Newport told the BBC, explaining:

We believe there are very important constraints to where functions can be relocated. There are very specific regions that take over when part of the brain is injured, depending on the particular function. Each function, like language or spatial skills, has a particular region that can take over if its primary brain area is injured.

Infant brains are uniquely capable of recovering from strokes, particularly when it comes to language, Newport told Science Daily:

Imaging shows that children up to about age four can process language in both sides of their brains, and then the functions split up: the left side processes sentences and the right processes emotion in language.

Strokes occur in newborns for a number of reasons. During pregnancy, proteins pass through the placenta from mother to fetus, in order to decrease bleeding risk. But these proteins put the fetus at risk for blood clots and strokes, according to About Kids Health. Clots can also form in the placenta and pass to the fetus, entering its circulation and potentially its brain causing a stroke. Labor and delivery are also common times for newborns to experience strokes due to the strain placed on babies' heads. The thickness of infant blood is also a potential cause.

Although fairly common, strokes in newborns can be difficult to diagnose, according to About Kids Health, as they usually show no clinical symptoms. For this reason, they often go unrecognized and untreated until the child is older. Common stroke symptoms such as speech problems and numbness are not easily detected in newborns. When newborns do show symptoms, they tend to present with a seizure. Seizure symptoms in newborns include repetitive facial movements, staring, unusual bicycling or pedaling movements, and apnea, or pauses in breathing associated with slowing of the heart.

The potential of a newborn baby having a stroke is scary for any parent, but the knowledge that brain plasticity can lead to language recovery is at least partially reassuring. Newport told Science Daily that her study was a small one, but research is still ongoing. Future findings could very well provide insight for prevention and adaptation to adult stroke victims.

More Like This
What To Do If Your Baby Sounds Congested
Why Does My Newborn Shake Sometimes? A Pediatrician Explains
Keke Palmer Casually Drops Her Baby's Sex On Jimmy Fallon
Mom Gives Birth To Record-Breaking 16-Pound Baby
What Parents Are Talking About — Delivered Straight To Your Inbox