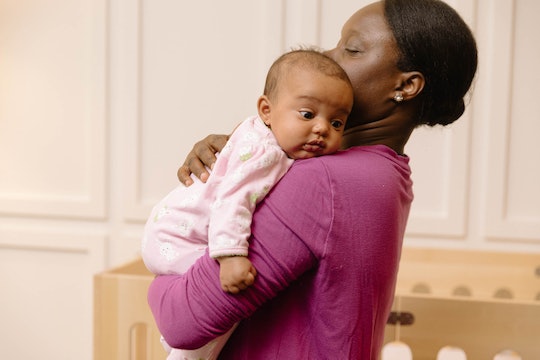 Newborn babies come with a wide range of "surprises." And if you're unprepared, these "surprises" could be alarming. Whether it's the soft spot on their tiny head, swollen genitals, jaundice, or their strangely black bowel movements, parenthood tends to pose more questions than answers. If you've given birth to a baby girl, you may even notice something a bit more concerning: blood in her diaper within a week after birth. As frightening as it sounds, here's why you shouldn't freak out if you see vaginal bleeding in a newborn baby girl. Guys, human beings and their bodies are a mystery entire unto themselves.

In case you've never heard, Dr. Kecia Gaither, Director of Perinatal Services at NYC Health+Hospitals/Lincoln tells Romper via email that vaginal bleeding in infant girls is caused by exposure to hormones in utero. Gaither goes on to suggest that parents watch out for a prominent or swollen clitoris and labia, and/or a milky discharge from the vagina, if they do notice that their newborn baby is bleeding. "Additionally," Gaither adds, "secondary to the withdrawal of hormone exposure while in the womb, the baby may have a small amount of spotting from the vagina. This usually lasts for a day or two post-birth. Nothing to be alarmed about, but certainly worth letting the pediatrician be aware." However unusual, it's actually completely normal and quite common, so there's no immediate need for concern.

Out of all the weird, but totally "normal" things your baby girl experiences from birth, the "mini-period" may be somewhat of a shock, and understandably so. But, for the most part, isn't something to obsess over. Parents describes this phenomenon as estrogen triggering the fetus' uterus to shed a small amount of blood, while The Bump says though it's likely the bleeding stems from estrogen withdrawal, it's important to rule out other potential causes, such as a "rough bowel movement" that caused a "scratch or cut" on the way out. The website Babyment.com explains further, saying that when the baby no longer receives all the hormones from pregnancy, the lining in the uterus essentially deteriorates. In other words, just like the menstrual cycle of a grown woman, bleeding may occur from the vagina as your newborn's uterine lining sheds. It can happen a few days up to a week after birth, but beyond that, you should seek medical attention to rule out more serious complications, such as wounds or infections.

However alarming it is to find blood in a diaper, be sure your baby's vaginal area is kept clean with warm water only, always wiping front to back, to avoid risk of infection. If a mini-period has been ruled out, or the blood was sporadic, constipation could be an issue, causing your baby to strain when pushing to evacuate her bowels. The strain can cause fissures — tiny tears in the anus — that will heal on their own within a few weeks. If neither of the aforementioned complications are a proven issue, and you're still finding blood in your baby's diaper, consider how you're feeding your newborn. KidsHealth.Org says 2-3 percent of babies develop an allergy to milk, or milk-based formula products (including dairy products you've eaten during breastfeeding) which irritate the stomach, producing loose, bloody stool (among other, sometimes more serious symptoms). Whether you're bottle or breastfeeding, talk to your doctor about steps you should take next.

Regardless of how little or how much blood you notice in your baby girl's diaper within those first few days after delivery, keep track of any additional symptoms before calling your pediatrician. Again, and unless the bleeding lasts longer than a week, it's probably nothing to worry about. And though it's not the most ideal way to enter the world — already equipped with a semi-running menstrual cycle — the "mini-period," will soon pass and your baby girl will get straight back to other milestones in no time.

More Like This
10 Ways Breastfeeding Is Good For Moms, Too
Gathre’s Winnie The Pooh Collection Is Finally Here
Double Your Fun With These Instagram Captions For Twin Pics
There's A Good Reason Why Your Baby Is So In Love With CoComelon