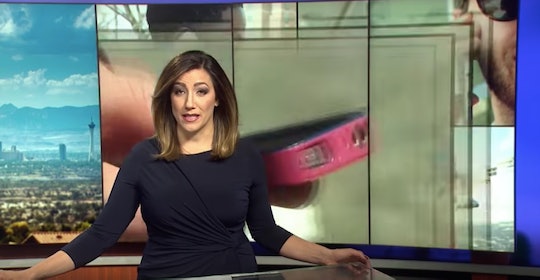 With candid honesty, a KSNV News 3 reporter and mother-of-two from Las Vegas is taking viewers along on her health journey towards healing after being diagnosed with a rare form of cancer caused by an abnormal pregnancy, known as a molar pregnancy. Over the past few days, news anchor Michelle Velez has shared her molar pregnancy experience and her treatment plan with her followers on social media to be "open and transparent" about her journey and to explain why she had not been on air over the past few months.

"I was diagnosed with a rare form of cancer that was caused by an abnormal pregnancy,” she wrote on Facebook on Oct. 17, alongside a photo of herself with her mother. "It’s extremely complicated so I’ll try my best to make it easy to understand. It’s a pregnancy that is not viable — meaning a fetus never formed — but instead of miscarrying.. the pregnancy continued to grow and produced invasive tissue."

This sort of pregnancy is very rare, affecting only about 1 in 1,000 pregnancies, according to the Mayo Clinic, which notes that a molar pregnancy is "caused by an abnormally fertilized egg." As Velez explained in her Facebook post, "In some very rare cases that tissue can turn into cancer and spread to other organs in the body. That is what happened to me. No good reason… just unfortunate dumb luck."

Fortunately, her form of cancer is treatable and the prognosis is good. "My doctors have every reason to believe I will be free and clear at the end of this," she wrote. "I am so thankful for that and that is what I’m choosing to focus on."

But the road to a cancer-free life is not going to be an easy one. In her Facebook post, Velez explained that in order to fight her cancer, she'll have to "go through aggressive chemo," but she isn't scared of the side effects.

"I will probably lose my hair and experience other side effects of chemo — but all that is temporary," she wrote. "I have already made it through my first two treatments this week. Total number of rounds all depends on how long it takes the tissue to disappear. Again this is a very vague explanation of what has happened to me the past 3 months. There is so much more to this… but the important part again… is that it’s treatable."

Through it all, Velez said she is remaining hopeful and optimistic. And the support she has received through social media, as well as her strong faith, is keeping her spirits "good for the most part," she wrote. And while she may not be able to respond to every comment and message, she assured her followers, "I’ve seen every one of them and it means the world to us."

On Saturday, Velez shared an update with her followers on Instagram, letting them know that she was receiving a blood transfusion, according to People. Her condition causes constant bleeding, requiring transfusions to keep her blood levels high enough for chemo. "Today, we had to make a decision about going in surgically and clearing out some of the tissue that’s causing the bleeding. It was a bit of a difficult decision because there are some risk that can delay chemo, but thankfully that didn’t happen and everything went really well."

The procedure should slow the bleeding down significantly and allow Velez to move forward with chemotherapy treatments — in fact, she "made it through" her first round on Monday, according to a recent Instagram post. Velez's strength and positivity will undoubtedly serve her well in the coming days and, surely, her loyal fans have greatly aided her during this difficult time.