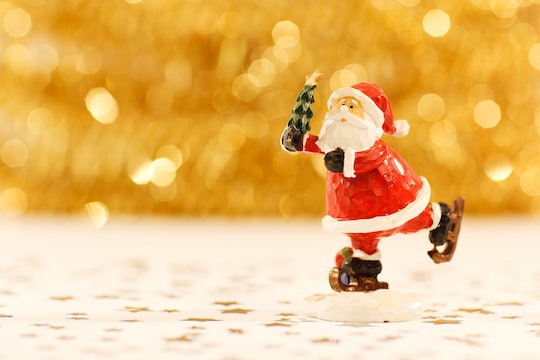 As the Christmas song says, this time of the year is the "happiest season of all." How could most people contemplating all the "joys" of the season — gingerbread cookies, toasty fires, and twinkling holiday displays — not be at least a little bit merry during the month of December? Spirits are high, the lights are beautiful, and the well-wishers are abundant. Despite all of those things, some people are not so happy this holiday season, all due to the Mall of America's decision to hire a black Santa Claus. People have become so unhappy, it seems, that a local newspaper closed comments on its black Santa Claus story over a serious racist backlash.

The trouble began after the outlet ran a story online about the Mall of America — the largest shopping mall in the United States — hiring a black Santa for the first time, ever. In the mall's 24 year history, there had never been a black Santa before. Mall Santas don't necessarily have the most glamorous job — they have to deal with a lot of crying children and very exhausted, very patient parents — but they do bring joy to a lot of children and turn the holiday season into something special for a lot of people.

The Star Tribune's story about Larry Jefferson, Mall of America's first black Santa, was supposed to be a heartwarming story about hiring on a Santa Claus that made more children (and adults) feel included in the tradition. "This is a long time coming," Landon Luther, co-owner of the Santa Experience in Mall of America said. "We want Santa to be for everyone, period."

The article chronicles Jefferson's upbringing and approach to playing Santa Claus. "What they see most of the time is this red suit and candy," Jefferson said, dismissing the idea that children saw his skin color before anything else. "[Santa represents] a good spirit. I’m just a messenger to bring hope, love and peace to girls and boys."

Ultimately, some readers reportedly disagreed. Just a few days after the article was first published, The Star Tribune was forced to close its comments section on the story due to a number of comments with negative racial elements, Star Tribune's editorial page editor Scott Gillespie wrote on Twitter. "Looks like we had to turn comments off on story about Mall of America's first black Santa," he wrote, before writing sarcastically, "Merry Christmas everyone!"

But just because comments were not allowed on the story did not stop people from reacting to the mall's decision on Twitter. Comments can no longer be made on CBS Minnesota's website either — but the original, hateful comments are still up for viewing.

The backlash, to put it lightly, was pretty ridiculous. Not to ruin everyone's holiday, but — spoiler alert, and please don't read this part out loud to your kids — Santa is not real. Santa does not live in the North Pole, he does not have elves that work for him, and does not have a magical set of reindeer that allow him to deliver presents to kids all over the world. Santa is a made up character, passed down each generation to make the holidays special for children. And because Santa is not real, his appearance is up to interpretation. Santa represents so much for so many children across the world, therefore his appearance should be representative of all children as well, no matter where they are.

Star Trek actor George Takei perhaps put it best, mocking both the outrage and backlash against the black Santa Claus and pointing out the hypocrisy of the situation at the same time:

Watching people meltdown over a Black Santa in the Mall of America. "Santa is white!" Well, in our internment camp he was Asian. So there.

(In case you were unaware, both Takei and his family, who are Japanese, were relocated to internment camps in 1942, when he was 5 years old, and did not return to their home in Los Angeles until after World War II.)

According to CNN, Jefferson will be playing Santa at the Mall of America for four days for children to get their photos taken with him, suited up in Santa's velvet suit and hat. And to him, this is a wonderful opportunity. Santa should be representative of everyone, he said.

"There needs to be more Santas of color, because this is America, and kids need to see that Santa looks like them," Jefferson told The Washington Post. "That helps kids to identify with the love and the spirit of the holiday, you know?"