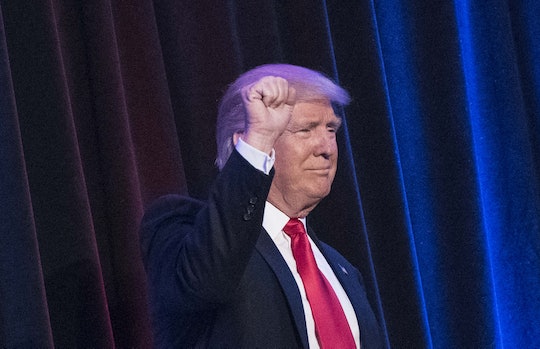 To say that the results of the 2016 presidential election have been shocking is an incredible understatement. After all, most polls ahead of Tuesday night's vote suggested that former Secretary of State Hillary Clinton would likely take the White House, and that, while it would probably be a close race, President-elect Trump would have to pull off a pretty stunning upset in order to win. And then, well, that's exactly what he did. Today, many Americans are reeling from the outcome, and the newspaper front pages after the election are showing not only that Trump's win was unexpected, but that no one really anticipated just how stunning an upset it would actually be.

While many Democrats were hopeful that election night would be a celebration of the country's newly-minted first female president, the optimism quickly began to fade as the results came pouring in. According to ABC News, Trump was not only able to win numerous crucial swing states, but he also managed to pick up states thought to be sure bets for Clinton. And contrary to pretty much all polling predictions, Trump ultimately won the Electoral College with a comfortable margin, ending up with 278 electoral votes to Clinton's 217. As many Americans awoke Wednesday morning to hear that Trump's stunning win had been confirmed, the newspaper headlines reflected just how shocked many voters were about the election's outcome.

Wednesday morning, the front page of The New York Times — which had predicted a Clinton win by a pretty significant margin based on polling data — ran the headline, "Trump Triumph: Outsider mogul captures the presidency, stunning Clinton in battleground states." The front page focused heavily on the likely reasons behind Trump's big win, and particularly on the effect of the blue-collar vote.

A photo of Trump against a black background dominated USA Today's front page, along with the headline, "President Trump: In stunning upset, billionaire candidate scores White House victory." The paper also highlighted the Republican Senate and House wins, and touched on the division apparent in the electorate.

The front page of The Wall Street Journal featured the headline, "President Trump: Populist surge lifts Republican to upset." Stories focused on the strikingly inaccurate election forecasts, Trump's unprecedented campaign, and the impact of the election results on world markets.

The Washington Post — which endorsed Clinton — also ran a "Trump Triumphs" headline, and focused on the notion that voter anger and frustration over the political establishment is likely what led to Trump's victory. The front page also questioned what a Trump presidency might actually look like, after a campaign "[run] with shock and awe."

The Boston Globe's front page featured a smiling Trump giving a thumbs-up to supporters, along with the headline, "A Trump Shocker: Republican captures presidency, defeating Clinton in swath of crucial states and sending ripples worldwide." The Globe also touched on the GOP's Senate win, as well as the marijuana legalization win in the state of Massachusetts.

The New York Daily News' front page was much less favorable about the election results, and ran with the headline, "House of Horrors: Trump seizes Divided States of America," along with a full-page photo of the White House with a lowered American flag. The cover also voters' "wide revulsion," as a sign of a "national nightmare."

As the world continues to let the surprising election results sink in, it's clear that perhaps the one thing almost all voters can agree on is that Trump did much better than anyone was expecting. Moving forward, it is still to be seen how the new president-elect will proceed — and that will surely also be news dominating the headlines in the days and weeks to come.