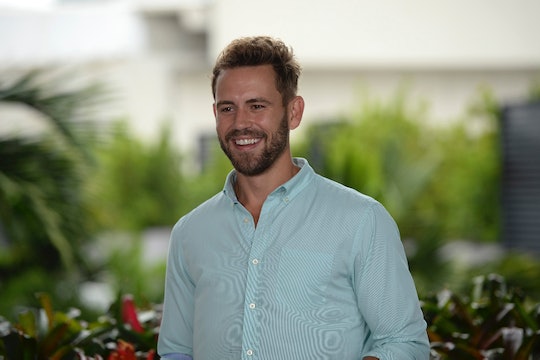 This season of The Bachelor is speeding towards its finale, but there's a few traditions we have to go through first. On Monday night, we experienced an old favorite: a past bachelor/bachelorette coming back to give advice and well wishes. Yes, Andi Dorfman knocked on Nick's door... not because she realized she's in love with him or anything, but because she wanted to pass down some words of wisdom. As it turns out, Nick had a few important things to say, too. Nick apologized to Andi on The Bachelor — and it's been a long time coming.

If you're a member of Bachelor Nation, you know these "surprise visits" aren't that much of a surprise. We had a feeling, especially with how familiar Nick is with the Bachelor franchise, that someone from past seasons would spring up during his season. After hometowns, like clockwork, Andi Dorfman came knocking on Nick's hotel room. From the teasers, it seemed that this may have been revolutionary for The Bachelor. Will Andi want Nick back? Will she join the season in some sort of Inception-Bachelor universe?

No, of course not. Instead, Andi wanted to discuss where Nick was at with the remaining women after hometowns. He didn't seem to thrilled, but c'mon Nick — how could you not see this coming? After drinking some scotch and talking about what she was feeling at this point during her season, Andi dropped the question we've all been wondering: is Nick going to have sex with them?

Nick gave a non-committal answer (typical), and reiterated once again that he's certainly attracted to them — as if talking about their appearance during hometowns wasn't enough. He then said that he would want to go there if there was a more emotional and romantic connection with them. Andi advised him to only sleep with them if he saw himself with them in the future.

Andi then asked the next question we all had on our minds: did he regret asking why she "made love to him if she didn't love him." If you weren't in Bachelor Nation at the time — or blocked it from your memory — on After the Final Rose after Andi's season, Nick dropped that they had sex in front of the world (and in a slut-shaming way). Now, though, Nick regrets doing that to Andi. He apologized to her in an actual sweet moment between them. It seems that Nick has grown since dropping that bombshell, especially since being in her position. He and Andi have that much more closure between them, which makes her visit so worth it.