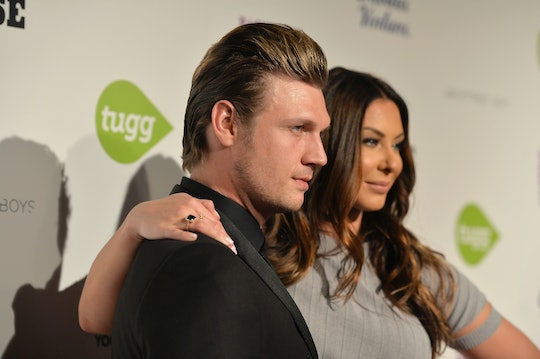 And baby makes four! On Friday, May 24, Nick Carter and Lauren Kitt announced they're expecting another baby, their second child, with the most beautiful photo on Instagram. And fans couldn't be more excited for them.

The couple welcomed their first child in 2016, and then suffered a miscarriage about eight months ago, according to E! News. Now, they're excited and ready to welcome a second child into their family, and it appears their son Odin is equally thrilled.

On Friday, the Backstreet Boys singer posted a photo of himself standing behind Kitt with his hands on her belly. Their son, Odin, can be seen kissing his mom's growing bump. Thank You God for giving us the greatest gift we could ever ask for," Carter captioned the sweet photo.

The expectant papa didn't share any other details about Kitt's pregnancy in his post, so it's unclear how far along she is at this time, or when the baby is due. Regardless, fans are elated for the family.

The comments section Carter's photo were flooded with clapping emojis, and messages of congratulations for his growing family. "Yayyyy!!!! I’m so excited for you and Lauren. You have shown us how much of an excellent father you are to Odin. Excited to see where this journey takes you!!!!" one fan commented.

Carter revealed they'd suffered a miscarriage on Twitter in September, according to E! News. He tweeted that he and Kitt were looking for "peace" as they grieved the loss, and then announced the gender of the baby they were expecting. The singer said at the time they he "was really looking forward" to meeting his baby girl, sharing with fans that Kitt was "3 months" pregnant when she lost the baby. Carter also shared that he had been excited to have "a little sister for Odin."

The couple welcomed their first child in April 2016, according to Entertainment Tonight, which also reported that they opted for an at-home water birth on April 19, five days after his due date.

Ahead of Odin's birth, Kitt spoke with People about becoming parents. At the time, she said she and Carter were both excited for the new venture. In 2016, she told the magazine her husband had just gotten off tour at the time, and she was hopeful he'd be able to fully "enjoy this next thing." It appears he did, and continues to do so every day. "He just got off tour, so I really wanted him to enjoy this next thing, which is to become a dad, and make it about him too and shower him with love and surprises," she told People at the time.

Carter and Kitt are already excellent parents, and fans can't wait to see how they welcome another baby into their little family. Congrats!