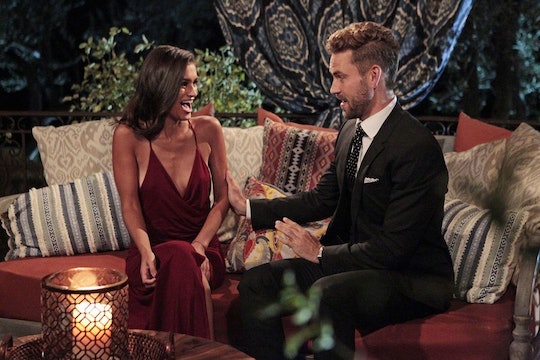 Nick Made A Big Choice On 'The Bachelor'

After a very chilly rose ceremony in Nick's hometown of Waukesha, Wisconsin, sunnier climates awaited the remaining Bachelor contestants. They packed up and headed to New Orleans for a one-on-one date, a group date, and the season's dreaded two-on-one. Of course, in order to squeeze every last drop of drama from this trip, the show's two feuding contestants were chosen for the honor of a two-on-one. But when Nick chose Corinne over Taylor on The Bachelor, Taylor relied on the power of a voodoo priestess to exact revenge.

After going head-to-head in an argument just before the rose ceremony and both receiving roses anyway, Corinne and Taylor's two-on-one date didn't exactly boast the most relaxed vibe. Plus, the fact that they went on a date in a literal swamp (ie., the beautiful bayou of New Orleans) ensured that no one was especially physically comfortable either.

Following a boat trip through the marsh, Nick, Taylor, and Corinne encountered a voodoo priestess and a tarot card reader and relied on the mystical expertise of both to sort through their respective ~energies~. The tarot card reader wisely split up the group, claiming that she couldn't read them together because the tension was too thick. Nick took the opportunity to speak to each of the women individually while the other was having her cards read, and Corinne took the opportunity to request a voodoo doll, presumably to be made in Taylor's likeness.

During the date, Corinne told Nick that Taylor had been unkind to her by insulting her intelligence and bullying her. Taylor maintained that she only called out Corinne for being less emotionally intelligent — but the fact remains that emotional intelligence is still a type of intelligence. She may not have been calling Corinne "stupid," per se, but the effect was still degrading. Unfortunately, Taylor clinging to her clinical expertise on the date only resulted in her coming off as cold, abrasive, and un-empathetic herself. Regardless of Corinne's shortcomings, Taylor was absolutely flexing her academic power (and privilege) over her and it was totally mean-spirited.

So it wasn't even all that surprising when Nick gave his rose to Corinne, sending Taylor home. Corinne seemed warm, vulnerable, and honest throughout the whole date, even when she was throwing Taylor under the bus. The tarot reader said that she sensed an emotionally intuitive water sign in the group, and Taylor jumped to the conclusion that she must be the water sign in question. But Corinne is actually a water sign, too. So it's possible Taylor read the whole situation in reverse.

After she was abandoned in the woods, Taylor returned to the voodoo priestess for a ritual ceremony that included being anointed with water. And if you thought that was just a spiritual cleansing for her flight back home, then you thought wrong. She actually went back to Nick and Corinne, interrupted their romantic dinner date, and pulled Nick away for a private conversation to "speak her truth." We'll have to wait until next week for the thrilling conclusion, since the episode ended on a Chad-esque cliffhanger. But Taylor is not doing herself any favors by obsessing over her elimination.