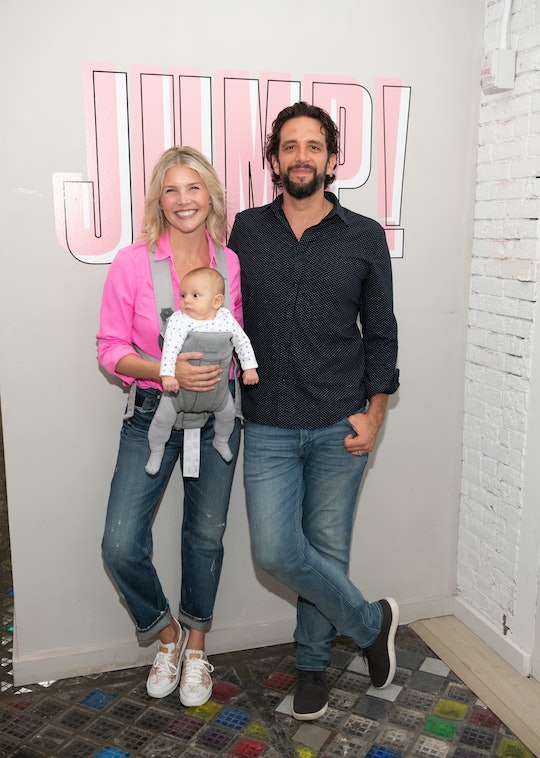 Nick Cordero’s Son Says First Words In Sweet Video: "He Still Knows Who His Dada Is"

While looking at a photo of his late father, Nick Cordero's wife recorded their son saying his first words in a precious video. On Sunday, Amanda Kloots shared heartwarming footage on Instagram of the couple's 1-year-old son Elvis blabbering with his mom and sweetly saying "right there" as he pointed at a photo of his dad who passed away earlier this month following a battle with coronavirus.

"Elvis said his first words today!!" Kloots captioned the video of Elvis. "Listen closely! He pointed at Nick in our new picture light and said 'right there.'"

In the video, Elvis can be seen standing up and looking a light with Cordero's face on it. "Where's Dada? Give him a kiss," Kloots tells Elvis from behind the camera. Elvis then kisses the light and giggles. "Right there," he says while pointing at the photo. "Yeah that's Dada! Right there!" Kloots replies. "That's right!"

Cordero — a 41-year-old Broadway star, musician, and father of one — died on July 6 after being hospitalized with COVID-19, according to CBS News. Cordero had been in the hospital since March after suffering from multiple complications from the virus; he spent weeks unconscious and had to get his leg amputated in April, according to CNN.

Kloots explained on Instagram that their son hadn't seen his father in months before saying those special first words. "He hasn't seen Nick since March 30th," she wrote. "The fact that he still knows who his Dada is, point to him, and give him a kiss to me is pretty amazing."

Kloots — a 38-year-old fitness instructor and Broadway performer — had been updating her followers about the milestones Elvis reached while Cordero was in the hospital. Their little boy took his first steps in June and celebrated his first birthday that same month. "Nick always wanted to be a dad," Kloots wrote on Instagram in May. "It's very hard to see Elvis growing and changing so much everyday, knowing how much Nick would love to be here with us."

But Elvis' meaningful words are just another way they're keeping Cordero's memory alive. "Truly I am scared. Scared of my new normal, of the pain, the loss, and being strong enough to get through it," Kloots wrote on Instagram earlier this month. "But, I know Nick is up above rooting for me, believing in me, and hoping for me. He wants me to LIVE this new life and he wants me to be the best version of myself for our son. I promised him in the hospital I would try to do that."