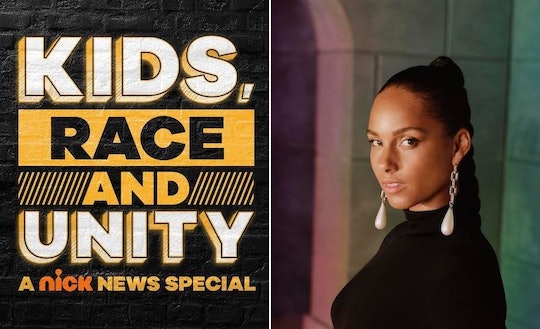 After roughly five years off the air, Nickelodeon's highly-rated Nick News is making a return with a one-hour special next week on race, inclusivity, and racial injustice. Hosted by Alicia Keys, Nickelodeon's Kids, Race and Unity: A Nick News Special will feature leaders and activists from the Black Lives Matter movement answering kid-submitted questions and discussing how families can have positive and effective conversations about race. What's more, this upcoming event is expected to be the first of a series of Nick News specials slated to roll out over the course of the coming months.

"I've had a vision of a forum that can engage kids during this time and help to focus our attention on how they might be feeling, and this Nick News special is it!" Keys said in a statement released by Nickelodeon. "Talking about race can be sensitive and uncomfortable; and sometimes we try to protect our children from racism they are already experiencing. But honestly, there is no way around this topic if we want to move forward in any kind of meaningful way."

According to Nickelodeon, Keys will host a series of conversations with a number of special guests, including Patrisse Cullors, Alicia Garza, and Opal Tometi, the co-founders of Black Lives Matter. Other guests slated to be involved in the Nick News special include social media star Tabitha Brown, family therapist Dr. George James, and the group of teens who founded Teens4Equality. Keys will also speak with Ibram X. Kendi, the author of Antiracist Baby, STAMPED: Racism, Antiracism, and You, and How to Be an Antiracist, and Keedron Bryant, the 12-year-old whose protest song "I Just Want To Live" has inspired millions and landed him a record deal with Warner Records.

"What’s happening in the world is not just a problem for the Black community, it's all of our problem and we ALL have to care about it in order to change it," Keys said. "This is such an important, vulnerable, honest and beautiful conversation, and I know many families may be searching for the right way to enter it. Let's really deep dive together."

Nickelodeon has said it plans to make a discussion guide and other anti-racism resources (made with help from Dr. James and The Conscious Kid) available to parents and caregivers via its social media channels and nickhelps.com website following the special's premiere.

Parents may remember Nickelodeon's original and highly-acclaimed Nick News program hosted by Linda Ellerbee. It ran on the network for more than 20 years and covered a number of tough topics, including wars, 9/11, HIV-AIDS, presidential elections, and major natural disasters. Over the course of its time on the air, Nick News garnered 10 Emmys, a Peabody, and a Columbia DuPont. The program was also the first and only children's program to have ever received the Edward R. Murrow award for Journalistic Excellence.

Catch Kids, Race and Unity: A Nick News Special on Nickelodeon, TeenNick, and Nicktoons at 7 p.m. ET/PT on Monday, June 29. For those unable to catch its premiere, the special will be made available on Nickelodeon YouTube, Nick On Demand, the Nick App, and the Nick Pluto TV channel shortly after.

More Like This
Lauren Conrad Shares Experience With "Lifesaving Reproductive Care" After Ectopic Pregnancy
Meghan Markle Calls On Men "To Be Vocal" In The Aftermath Of Roe v. Wade Ending
Taraji P. Henson Says “Guns Have More Rights Than A Woman” At The 2022 BET Awards
Can States Ban The Abortion Pill? FDA Rules May Make That Hard