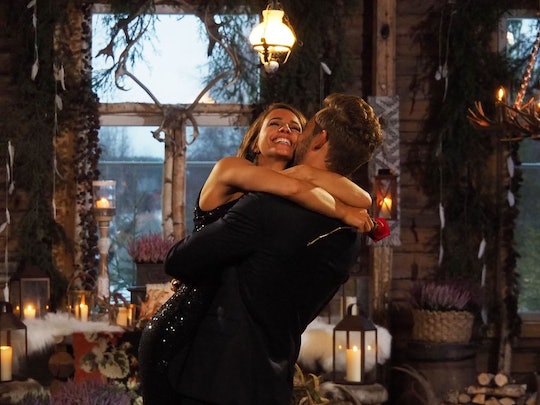 It's been a tumultuous road to the finale for Nick Viall and Vanessa Grimaldi, but miraculously, they managed to pull off an engagement and keep it until at least the post-season special. But Nick and Vanessa's After the Final Rose was very awkward, proving that they may still be suffering from some of the same problems that plagued them all season long.

When Vanessa was in her one-on-one interview with Chris Harrison, she confirmed that they have already had "knock-down, drag-out" fights over several of the contentious issues brought up during their season. She tried spinning it as the fights of a "normal relationship," but her stern tone and gritted teeth did little to ease the obvious tension when she admitted that they knew how difficult their relationship was going to be.

In fact, most of Nick and Vanessa's joint interview focused on how hard their journey was, both on the show, and in the time since they've gotten engaged. It was a strange dynamic, reminiscent of Juan Pablo's refusal to say "I love you" or JoJo and Jordan having to defend their controversy-filled pairing on ATFR. Nick kept repeating that both he and Vanessa were "realists" about the relationship, and Vanessa seemed pretty agitated whenever he spoke. Live TV is tough to do, but literally everyone noticed how unhappy she looked, and many folks pointed out that Raven actually looked much happier during her interview with Chris, even though she lost.

Rather than give fans a blissed out interview in which they gushed over their love for one another, Nick and Vanessa seemed instead to be prepping viewers for the worst. "We know we have a long way to go and we're realistic," Nick said. "We're still getting to know each other. That's the reality."

Vanessa seemed pretty frosty over the fact that their entire relationship was televised, although she admitted earlier in After the Final Rose that, since she had never watched a full season before, she didn't totally understand how the show worked. "We're taking baby steps. We're still getting to know each other," she echoed to Chris when asked if they had set a wedding date yet. "We still have things to figure out."

They had seemed to settle on the fact that Vanessa would move to the U.S., but Nick pointed out how difficult social media made their relationship for "her side of things." Ultimately, it just seemed like the pair were way more stressed out by being together than happy being together. It's possible that they were still dealing with a lot of emotional overwhelm, but their restrained demeanors didn't leave fans feeling too hopeful that they would last.