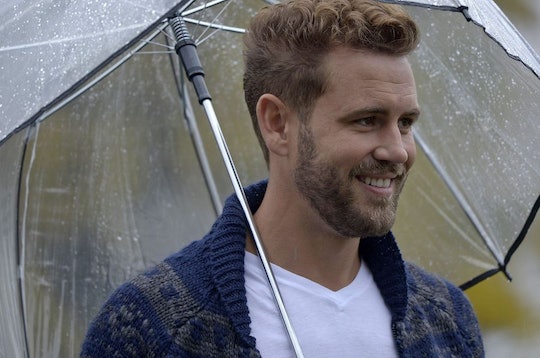 Nick Viall Has Some 'Dancing' In His Future

He'd been teasing the information for two days, initially planning the big announcement as a televised spot that would air during the Oscars. Fleiss called the would-be reveal "historic," even though revealing that a former Bachelor was going to be on Dancing With the Stars for the first time, or even just revealing a DWTS contestant early for the first time, is not what the word "historic" means.

While ABC had initially given Fleiss the go-ahead to make the announcement during the Oscars (he had his tux on and everything!), it looks like he got bumped at the last minute for time. (The ceremony was scheduled to start 30 minutes later than usual and it ran super long, thanks to that Best Picture snafu.) He live-tweeted the whole saga in real time, like all #HistoricAnnouncements.

Hoo boy, that was a lot. Fleiss also couldn't resist shoehorning in a joke about the (legitimately historic!) Oscars Best Picture mixup.

But the next day, he dropped the big news: Nick was joining Dancing With the Stars.

Nick actually has some potential to do well on the show, if his execution of the Backstreet Boys' "Everybody" choreography this season is any indication. Even though competing on DWTS has always carried with it a certain connotation of being a celeb who has recently fallen from grace using the show as a vehicle to samba their way back into America's heart, Nick has already done the work of winning America back over. His turn on Bachelor in Paradise was so likable that he became an out-of-turn Bachelor. So why would Nick need to go on Dancing With the Stars?

The heavy implication here is that Nick did something really unlikable, either during The Bachelor finale, or in the weeks between when the final rose ceremony taped and when it aired. We already know that Rachel is the next Bachelorette, even though she's still in the running as part of Nick's top three. We don't know exactly what happened between them yet, but it's possible that Nick picked Rachel for the final rose and she dumped him. It's also possible he chose Vanessa and she dumped him sometime later. Either way, it seems like Nick might have some making up with America to do. That or he just really wants to up his dancing game. Regardless, I'm in!