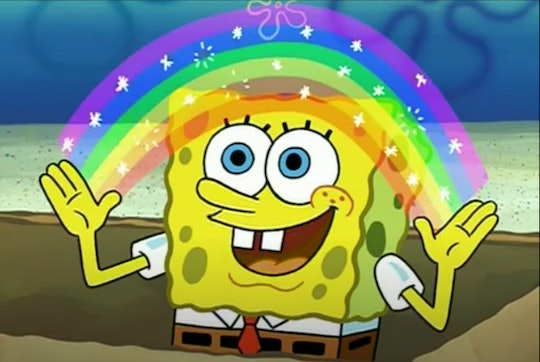 To celebrate Pride Month this year, Nickelodeon recognized SpongeBob as a member of the LGBTQ+ community in a lovely tweet over the weekend with a rainbow-hued photo of the happy yellow sponge.

"Celebrating #Pride with the LGBTQ+ community and their allies this month and every month," Nickelodeon tweeted on Saturday with photos of SpongeBob, Henry Danger star Michael D. Cohen, and Korra from Legend of Korra. While Nickelodeon's tweet did not confirm and mention anything specific about SpongeBob's sexual identity, it did recognize the cartoon character as a member and/or ally of the LGBTQ+ community.

The + in "LGBTQ+" is inclusive of other groups like asexual and intersex. In a 2005 interview with Reuters, as People reported at the time, Stephen Hillenburg, the creator of SpongeBob SquarePants, said that SpongeBob and his best friend Patrick Star are neither straight nor gay. "We never intended them to be gay," he said. "I consider them to be almost asexual. We're just trying to be funny and that has nothing to do with the show."

According to the Trevor Project, a non-profit organization that provides crisis intervention services to LGBTQ people under 25, asexuality is "an umbrella term" that "exists on a spectrum." "Asexual people — also known as 'Ace' or 'Aces' — may have little interest in having sex, even though most desire emotionally intimate relationships. Within the ace community there are many ways for people to identify," the nonprofit explains.

SpongeBob's appearance in this tweet is significant, however, since it does feature photos of members from the LGBTQ+ community that appear on Nickelodeon. Korra has been in relationships with both male and female characters on Legend of Korra. After Korra and her longtime friend Asami fell in love in a 2014 episode, the show's co-creator Bryan Konietzko wrote on his blog that he "never thought they could get away with" depicting their relationship on an animated show that airs on a children's television network. "We did it for all of our queer friends and colleagues," he wrote. "It is long overdue that our media (including children's media) stops treating non-heterosexual people as nonexistent, or as something merely to be mocked. I'm only sorry it took us this long to have this kind of representation in one of our stories."

Cohen, who plays Schwoz Schwartz on Henry Danger, told TIME last year that he transitioned nearly 20 years ago. Although he does not use the word "transgender" to describe himself, he does view himself as a part of the community "that typically embraces that label." "People don't understand," he told TIME. "They think it has to do with sexuality and it doesn't. They think it has to do with pushing an agenda on kids and it doesn't. What it does send a message to kids that whoever they are, however they identify, that's celebrated and valued and OK."

LGBTQ+ representation in children's media has come a long way since SpongeBob Squarepants first premiered in 1999, but there's certainly much more to do done. During Pride Month and always.