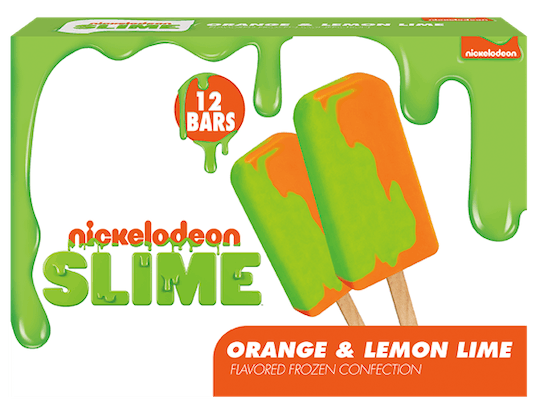 Don't Panic Or Anything, But Walmart Will Soon Sell Nickelodeon Slime Ice Cream

Growing up, there was nothing I wanted more than to be slimed on Nickelodeon. Years later, Marc Summers of Double Dare fame shared the recipe for the iconic green goo in a bid of nostalgia, revealing that it was created using mostly food ingredients that no one would ever dream of combining like vanilla pudding, apple sauce, and of course green food coloring. The network's infamous green slime is making a come back yet again, as People first reported this week, and this time in a most delicious way. That's right, Nickelodeon Slime ice cream is coming to Walmart and it'll bring you right back to your childhood.

First things first: these Nickelodeon Slime ice cream cups and confection bars will be launching exclusively at Walmart on Monday, April 29, so obviously you need to plan your shopping trip accordingly. As for the finer details, a rep for Walmart tells Romper the ice cream cups are a vanilla low fat ice cream with green frosting swirls while the pops are orange and lemon lime flavored. These slime-themed treats "will bring back nostalgic thoughts of all your favorite Nick shows," the rep tells Romper.

Either flavor is surely decidedly more delicious than the mixture Nickelodeon was dumping on people all throughout the 90s. Kids of the 90s were officially let in on the secret slime recipe in 2017, when Summers shared the concoction with Tech Insider, revealing that it was a mixture of vanilla pudding, apple sauce, green food dye, and oatmeal. Summers also told Tech Insider that he found the resurgence of slime at the time a little "weird." Still, the former Nickelodeon gameshow host told the news outlet the network's recipe had a superior consistency to that of the stuff kids are selling in school yards and going bonkers online over these days.

"You know, it's weird. Slime is hot again," he told Tech Insider at the time. "And there's all these recipes online that have nothing to do with what we used as real slime. It started off with vanilla pudding, apple sauce, green food coloring and a little oatmeal. The consistency of that was far better than the stuff that I see today. I don't know what it is."

Slime isn't just back in food form, either. Double Dare returned to Nickelodeon, green ooze and all, in 2018, according to the New York Post. Liza Koshy, a YouTube sensation, was pegged as the host, though Summers was also involved, according to The Hollywood Reporter. The show returned in June 2018 for Season 1, and Project Casting posted an open casting call for Season 2 in February of this year, which then premiered on March 11.

Nostalgia is always a welcome feeling, especially when it comes in the form of delicious ice cream. It's unclear at this time whether Nickelodeon Slime ice cream is a limited time product, or will be around for good. Either way, it's sure to fly out of Walmart's freezers, so get yours while you can to enjoy all summer long.

You can even introduce your kids to it, and maybe catch a few episodes of Double Dare together.