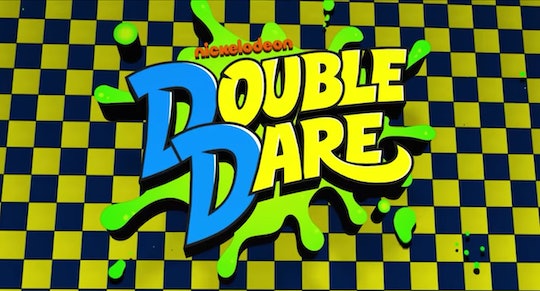 The past few years have been a pretty great time for 90s reboots, and in April, Nickelodeon announced its plan to resurrect its popular children's game show, Double Dare. The show is one likely to be familiar with both millennials and Gen Z alike — it originally ran on the network from 1986-1993, and then again in 2000 — but its latest incarnation has brought with it a thoroughly modern and inclusive update. In a December "family edition" episode, Nickelodeon's Double Dare featured a family with two dads, according to The Gaily Grind, and it was a big win.

For one, the fact that the show would include a same-sex couple with their kids is a huge deal for LGBTQ representation, especially since a show geared towards kids like Double Dare would traditionally be expected to only show teams consisting of a mom and a dad (aka only one very narrow definition of what a family can actually look like). But it's not only that a two-dad family was included — it's also that they were able to appear just like any other loving family while doing it.

In the episode, according to the Georgia Voice, host Liza Koshy introduced the "Double Dads" team, consisting of dads Liberty and Bryan, and their sons Oscar and Marcos, and said, "They love football, and they love each other. They are team 'Double Dads.' That’s right! It’s about time we had double dads on Double Dare."

In a clip of the intro, shared by Twitter user Chad Mosher, Koshy asked the couple a bit about their backstory, including whether or not they both go by "Dad" (they don't — Liberty said he goes by "Papa"), and Bryan explained that they "were fortunate enough to adopt [their] sweet boys" about six years ago, and that "it's been amazing ever since." But, just as importantly, the foursome spent an equal amount of time chatting about their love for football. Bryan told Koshy, "we love it so much, basically all fall through Christmas, that's what we do every Sunday."

In other words, they're pretty much exactly the same as any other football-loving American family, and it's so important that they had the opportunity to show that off. And in addition to being an example to viewers of a real-life, same-sex family for those who may not be used to seeing one, they also gave kids of same-sex parents a long-overdue chance to see a family on TV that look like theirs.

As much as LGBTQ families aren't often seen on children's shows though, the Double Dare episode isn't actually the first time that Nickelodeon has included same-sex parents in its programming. According to LGBTQ Nation, in 2016, Nickelodeon aired its first-ever portrayal of gay dads on the animated series The Loud House, and in 2014, it also showed a lesbian couple in the animated action series Avatar: The Legend of Korra (though they weren't actually parents).

Though the Double Dads team didn't actually win on the episode, Bryan actually responded to Mosher's tweet, and wrote that it "was such a fun day for [his] family."

Although representation of LGBTQ families on television still has a long way to go, it's at least encouraging that a network like Nickelodeon is including same-sex parents on children's shows. And it's not the only one either: the two-season run of The Cartoon Network's animated show, Clarence, included a character with two moms, voiced by Lea DeLaria and Tig Notaro, according to After Ellen, while The Disney Channel also introduced a character with two moms on Good Luck Charlie in 2014, according to E! News.

As rare as it still is to see same-sex families on TV though, the fact that episodes of shows like Double Dare are happening is a hopeful sign that that won't always be the case. And ideally, one day soon, it won't even be newsworthy.