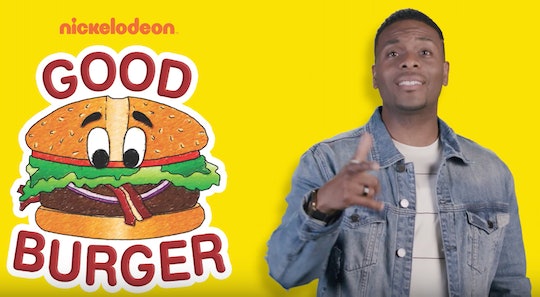 The '90's are back in a big way — the Spice Girls are touring, scrunchies are trendy again, and Nickelodeon's All That is returning to TV with a brand new look and cast. In honor of this big return, Nickelodeon is honoring the original All That show (and its fans) in a big way — by making Good Burger (from the iconic All That skit) a real thing. Let's just say that Nickelodeon's Good Burger restaurant will make everyone's 90's dreams come true this summer — and I'm completely fine with that.

When the teenage sketch comedy show All That debuted on Nickelodeon on April 16, 1994, it had a lasting impact on its viewers. It introduced many of its young viewers to sketch comedy for the first time, introduced them to some now-popular (but not so well known at the time) musicians, and introduced them to Good Burger (home of the Good Burger) — a hilarious sketch surrounding a fictional fast food restaurant. The sketch, involving a ditzy but fun loving cashier named Ed, became so popular with audience members that it even became a spin off movie in 1997, according to Complex. I mean, who can forget that iconic opening line? "Welcome to Good Burger, home of the Good Burger, can I take your order?"

Now, more than 20 years later since the sketch's debut, Good Burger is finally becoming a real thing. Starting on July 10, people can finally eat a good burger at Good Burger's pop-up restaurant located in the West Hollywood neighborhood of Los Angeles, according to Us Weekly.

But there will be time for people to prepare for their pilgrimage to the best fictional fast food restaurant of the '90's. Tickets to the pop-up restaurant officially go on sale on Monday, June 17, at 10 a.m. on Good Burger's website.

It sounds like this restaurant is what everyone dreamed of when they were young. While at Good Burger, people will be able to feast on good burgers, good shakes, and something called "good chunks" which sound delicious. But the pop up isn't just about food. While people are there, they will be able to purchase merchandise, play games, and experience some "insta-worthy moments", according to a press release. On top of this, the restaurant promises that there might be a "few comedic mishaps and surprises along the way." Oh. my. goodness.

"With the return of All That to our air, this is the perfect time to give '90's Nick kids and a whole new fan base an opportunity to settle in for a fast food culinary adventure, which will of course, include Ed's special sauce!," Sharon Cohen, Executive Vice President of the Nickelodeon Experience, said in a statement.

But, it's just a bit unclear if Ed himself (played by Kel Mitchell) and his iconic song about dudes will be making an appearance at the pop up. He'll have plenty of time to show up — the restaurant located at 7100 W. Santa Monica Blvd in Los Angeles will be open until the end of the year. So, if people can't get their tickets this summer, they will have plenty of time to make their way there in the fall.

Good Burger's legacy is long lasting. After All That went off air in 2005, people still continued to quote some of the iconic lines from it. So, it makes sense that Good Burger will make its big return to the new reboot of All That when it premieres on Saturday, according to Entertainment Weekly. The sketch will have some new actors, but still feature the familiar faces and concepts that people know and love from the original. This means that the people who grew up with All That can still watch it and love it, while younger audiences can discover the show for the first time.

Thank goodness the '90's are cool again. Now if only they'd bring back crystal Pepsi.