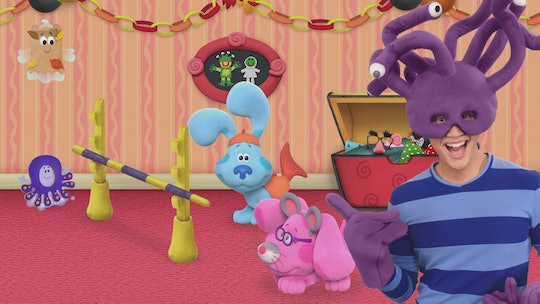 While traditional trick-or-treating may or may not be recommended in your area this year, Halloween is far from canceled. In fact, there are a number of ways to help your child get into the Halloween spirit, like tuning into Nickelodeon's "HallowScream" premieres — a full month of new, Halloween-themed episodes of popular live-action, animation and preschool series like Blue’s Clues & You! and The Loud House.

Nickelodeon's month-long schedule of "HallowScream" premieres begins Oct. 2 on Nickelodeon with an episode of SpongeBob SquarePants titled "Spookiest Scenes Countdown Special" that features Patchy the Pirate reviewing the series' most spooktacular scenes. On the Nick Jr. channel, younger viewers can tune in to an Adventures of Paddington episode titled "Paddington and Halloween" that sees everyone's favorite stuffed bear go trick-or-treating.

"HallowScream" continues on Nickelodeon on Oct. 9 with a special 30-minute episode of The Loud House titled "Ghosted," in which Lori, Lincoln, and Clyde banish a ghost that may have actually been a good luck charm. The spooks continue on Oct. 9 with The Casagrandes in an episode that sees the kids try to break the record for staying in a cemetery overnight and then be haunted by a chicken.

On Oct. 11, the Nick Jr. channel will air an episode of Rainbow Rangers titled "Spooky Costume Party" that sees the Rangers pull together an eco-friendly costume party. The Halloween costume fun continues on Nickelodeon on Oct. 14 with the Blue's Clues & You! "Spooky Costume Party" episode. Viewers can join Blue, who opts to be a fish for Halloween, and Josh in helping Magenta pick a costume.

"HallowScream" premieres continue Oct. 17 with an episode of Ollie's Pack on Nickelodeon that sees the gang work up the courage to visit a spooky house for full-size candy bars. On Oct. 23 an episode of It's Pony centers around Annie and Pony saving the family's pumpkin crop.

On Halloween night, kids can celebrate with a special "Happy Slime-o-ween" episode of Nickleodeon's game show Unfiltered that sees host Jay Pharoah lead Darci Lynne Farmer, Gabrielle Nevaeh Green, and Lex Lumpkin in gathering clues about mystery celebrity guests. Later in the night, Group Chat with Jayden and Brent hosts Jayden Bartels and Brent Rivera get into the Halloween spirit with candy corn, mummies, and apple bobbing before being visited by Adam Sandler and Kenan Thompson.

To make sure your family doesn't miss a moment of Nickelodeon's "HallowScream" premieres, check out Nickelodeon's full TV schedule on the network's website. Additional Halloween-themed long and short-form content will be available for preschoolers throughout the month on Noggin, Nickelodeon's subscription-based interactive learning service.