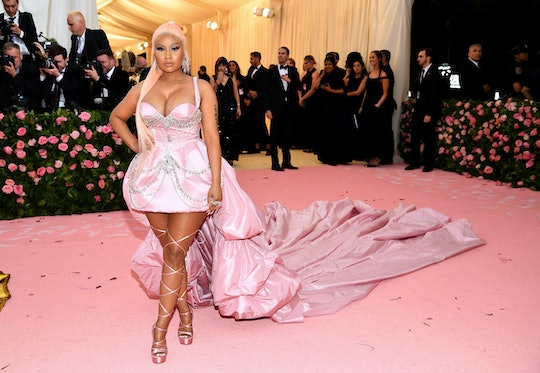 It's always exciting when your favorite celebrities announce that they are expecting a child — but that announcement is up to them to make. Take rapper, Nicki Minaj for example. On Thursday, Nicki Minaj ignited pregnancy rumors with a tweet, but it's a tweet that could mean anything. People should really calm down — if she wanted to tweet that she was pregnant, she would have tweeted that she is pregnant. A representative for Minaj did not respond to Romper's request for comment.

Minaj is a woman of many talents — she's a rapper, a Red Lobster aficionado, and showed off her comedy skills during a recent bit with talk show host, Jimmy Fallon. During an appearance on The Tonight Show Starring Jimmy Fallon on Thursday, Minaj and Fallon went to Red Lobster together, where they dined on cheddar bay biscuits, and ordered enough food (and lobster) to feed an entire family. The entire bit was incredibly entertaining and revealed that Fallon and Minaj love to eat seafood. In no way did the segment hint that Minaj could be pregnant.

But, her tweet from Thursday night certainly had people thinking she is. During the segment, Minaj could be seen drinking a strawberry Lobsterita, according to People, but Minaj assured people on Twitter that the drink had no alcohol in it. "For the record; that was iced tea in that lobsterita glass," she tweeted. "No alcohol was consumed in the making of our dinner date."

People on Twitter automatically thought that this was suspicious. If Minaj had not said anything, people would have just gone on their ways and not thought much of it at all. But, since she said that no alcohol was consumed during dinner, people on Twitter had to wonder if this had a deeper meaning, and if she was hinting that she is pregnant.

"Yas the queen is pregnant I am so happy for her," one Twitter user wrote.

"So are we all invited to the baby shower orrrrrrrr what," another Twitter user replied.

But here's the thing — neither Minaj, or her team have confirmed the news. So it isn't fair for anyone to assume anything. Minaj could have just wanted to let her fans know a fun behind the scenes fact about the skit — not that she was pregnant.

People should just calm down and let her make any major announcements when she wants to. Rushing to assumptions won't make things better or force her to announce the news any sooner.

Even Minaj herself has said that she isn't pregnant. Earlier this month, Minaj revealed on her Apple Beats 1 radio show that she and her boyfriend, Kenneth "Zoo" Petty are not expecting a child together, but having a child is a "goal", according to Us Weekly.

"We did get our marriage license," Minaj said during a June 21 episode of her radio show, according to Us Weekly. "I think I have what I was striving for, just happiness. It was so hard to get to a happy place. Now that I'm here, I don't want to compromise for anyone or anything."

Pregnant or not, you can't deny that Minaj is super happy, especially since she's in a happy relationship and got to eat as much Red Lobster as her heart desired.