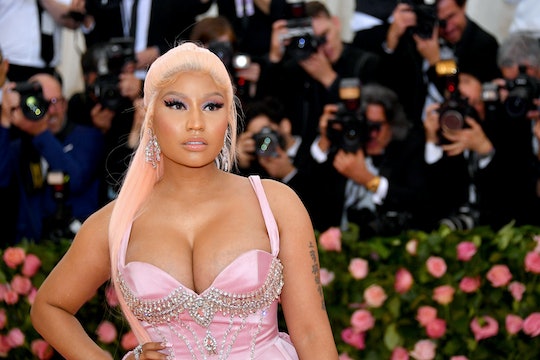 Minaj revealed the exciting news on July 20 with a gorgeous photo on Instagram. "#Preggers," 37-year-old Minaj captioned a photo of herself smiling and wearing an embellished bikini top and high heels with her hands holding her bump.

In two other posts, the expectant mom shared even more fabulous photos of herself holding her bump. "Love. Marriage. Baby carriage," Minaj captioned one of the photos. "Overflowing with excitement and gratitude. Thank you for the well wishes."

Minaj's pregnancy announcement comes almost one year after the rapper wrote in a now-deleted tweet from September 2019 where she stated that she had "decided to retire" and start a family with her husband, according to Billboard. And almost 10 months later and she's got a baby on the way.

Back in May, as Vibe reported, Minaj sparked rumors about a possible pregnancy after she told fans she had been craving red meat and and had been "throwing up and peeing non stop." But when one fan asked her to post a picture of her baby bump, she teased that she would in a "couple months" because the world wasn't ready yet. Well, she has finally delivered on that promise, releasing some stunning photos two months later.

While Minaj has made this very exciting announcement, she has not yet revealed the sex of her child, how far along she is in her pregnancy, or when she is due. Only time will tell if she decides to share those details with fans ahead of her little one's arrival, but we can surely keep our fingers crossed for more updates in the meantime.