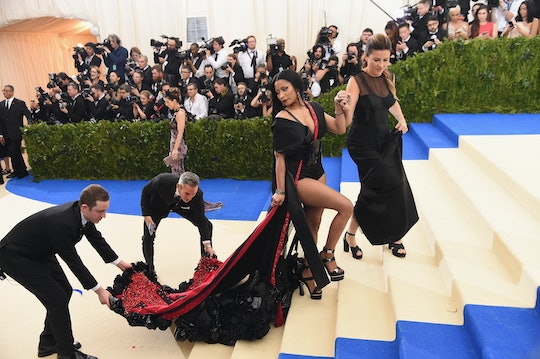 Obviously, it can sometimes be easy to become jealous of celebrities. They're rich, they're famous, and they always look flawless. But more often than not, celebrities can surprise us. From random acts of kindness, like Taylor Swift visiting young fans in the hospital, to Chrissy Teigen paying for a fan's esthetician school fees, celebrities have started a new trend of paying it forward, in a big way. And now, a certain badass female rapper is joining the ranks of such celebrities in spreading positivity via social media. Last night, word came that Nicki Minaj is paying for fans' tuition, and it's the coolest thing ever.

Last night, Minaj took to Twitter to offer fans money for college tuition, among other school costs like books, equipment, and yes, even student loans. However, there was one catch. Minaj also requested that fans show proof of their grades, requesting students who have straight A's provide evidence of their hard work. After that, Minaj was overcome with a swarm of tweets requesting money for college costs. And the best part? She gave her word to over a dozen fans who asked for help that she would pay what they needed. Of course, Minaj couldn't help everyone out, but promised she would offer the same deal in a couple of months.

After making the initial offer, Minaj soon responded to dozens of fans who told her of their problems paying for school. She gave them her word that if they messaged her the necessary information, she would take care of it.

But it wasn't just tuition Minaj offered to help with. Plenty of fans were sure to let her know that, though they might be out of school, their student loan debt was still haunting them. So, what did she do? Offer to pay off some loans as well, of course.

It's refreshing to see such a successful celebrity use her social media for good, which is exactly what Minaj has done. The singer and rapper recognizes that, unfortunately, Americans don't have it all together, and the cost of college is honestly crippling to so many.

And while Minaj may be done helping fans out for now, she'll be back at it soon enough. So if you aren't already following the star on Twitter, you might want to get on it.

Seriously, Nicki Minaj is an international treasure, and her latest dose of generosity made that completely and unflinchingly clear.