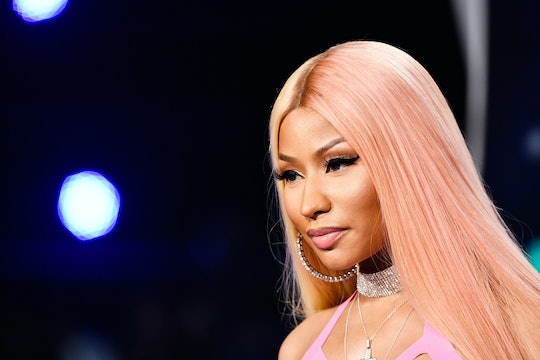 After 10 years in the game, one of the hottest female rappers, aka Nicki Minaj, has revealed she's ready to hang up the mic. As for what prompted the "Super Bass" singer to bid adieu to her career seemingly out of the blue? Nicki Minaj's reason for retirement centers on her desire to have a family, an announcement that has divided fans.

Without any warning, Minaj took to Twitter Wednesday to announce that, effectively immediately, she's retired. "I've decided to retire & have my family," she penned in the since-deleted tweet. "I know you guys are happy now. To my fans, keep reppin me, do it til da death of me, in the box- cuz ain't nobody checkin me. Love you for LIFE."

Although the entertainer has yet to clarify the details of her potentially forthcoming retirement plans, Minaj did acknowledge the abruptness of her message. "I'm still right here. Still madly in love with you guys & you know that," she wrote in a tweet responding to a fan who'd accused the rapper of having left them hurt. "In hindsight, this should've been a Queen Radio discussion & it will be."

She continued, "I promise u guys will be happy. No guests, just us talking about everything. The tweet was abrupt & insensitive, I apologize babe." Queen Radio is the Apple Music Beats 1 radio show Minaj hosts.

But while Minaj's announcement caught many fans off guard, the rapper has recently been dropping hints about her desire to get married and begin having children. First, there was the 2018 Wonderland interview in which she hinted that she was inching closer to motherhood. "I've got to get married first then I'll have a child," she told the magazine after revealing she was in a relationship. "I might be closer than people think actually. I love children. I'm not going to put that off for much longer."

Then in March, a few months after Minaj and Kenneth "Zoo" Petty had taken their relationship public, the rapper casually referred to Petty as her "husband" during an episode of Queen Radio. "Every night when I get out of the shower, my husband takes this really good lotion that we just bought, and he massages my feet, and rubs them, and he rubs each toe individually, and the heel, and the ball of my foot, and he does it all," she said, according to People.

Minaj further fueled speculation about her relationship in June, when she revealed that she and Petty had already picked up a marriage license, revealing the tidbit during an episode of her Apple Beats 1 Queen Radio show. "We did get our marriage license," she said, according to People. "I think I have what I was striving for, just happiness. It was so hard to get to a happy place. Now that I'm there, I don't want to compromise that for anyone or anything."

Last but not least, Chance the Rapper dropped a track titled "Zanies and Fools" in late July, on which Minaj can be heard rapping, "He the Clyde to my Bonnie, 'bout to walk down the aisle and be a mommy," a reference many speculated referred to her future with Petty.

Not to mention, Minaj recently changed her Twitter handle to "Mrs. Petty."

As for fan reactions to the news, people weren't sure how to feel considering the news is bittersweet.

"Nicki I really f***ing love you and f***ing hurts that your retiring but I’m happy your starting your family i wish you the best of luck," one person tweeted.

Someone else said: "I'm truly happy for Nicki Minaj but she retiring from music is really heartbreaking."

"Honestly, DEVASTATED that @nickiminaj is retiring," a commenter penned. "She raised me w her beam be up scotty mixtape. taught me what being a bad bitch is all about @ the tender age of 13. a true legacy, however, i’m excited for her to have her lil barbz

Although Minaj's retirement announcement has left many of her Barbz feeling a tad emotional, it's important to keep in mind that this might not be for good. As Rolling Stone has pointed out, many famous rappers have surprised fans with news of their retirement, only to return years later. Stay tuned, folks.