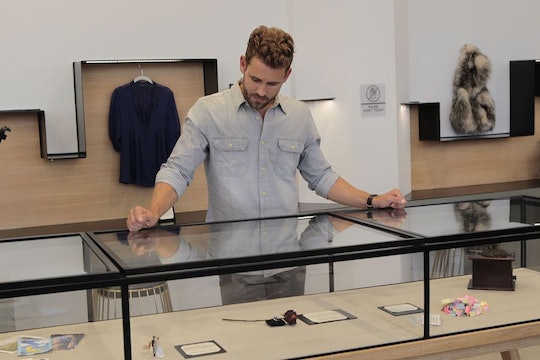 Nick’s Mom Is Back On 'The Bachelor'

We're only four weeks into Nick Viall's turn on The Bachelor, but the first trip of the season had to come sooner or later. Unfortunately, it wasn't a particularly exotic location this time around, but it is one very important to Nick's backstory. For the first trip, he takes the women to Wisconsin to visit his hometown where, of course, his parents were waiting to give him a pep talk. It also meant that Nick's mom returned to The Bachelor, and she's cultivated quite the Twitter fanbase for herself.

Since Nick has been the runner-up on not one, but two seasons of The Bachelorette, his family has obviously been featured in hometowns episodes before. We met his parents and ten siblings during both Andi Dorfman and Kaitlyn Bristowe's seasons, but this was his parents' first appearance as official Bachelor in-laws. They definitely came off as warm, supportive, and funny, with the best intentions for their son. His dad really delivered on high-quality dad jokes, gently teasing his son over how the family hopes they don't have to see him back on the show again. But Nick's mom Mary Viall quickly won over Twitter with her sassy haircut, unapologetic eyeliner and rad moto jacket.

And while it's true that she did look really cool and inspire several glamorous celebrity comparisons, Nick's mom was also incredibly perceptive about her son's experience on the show. In a cutaway interview, Mary revealed that she was hopeful about the fact that Nick was bringing the women home so early in the season, speculating that it was because he was feeling genuine connections.

"With the heartbreak that he's experienced, I don't know if he's holding a lot back," she said. "But I think him wanting to come home makes me wonder if there's just something there that he already sees, some potential in someone. I hope so."

Nick confessed to his parents that he's officially so invested in the women he's been dating that he feels the same way he did when he was a contestant, just because he still feels like he has something to lose. Mary reminded him that when he meets the right person for him, he should, in theory, feel safe enough to let his guard down. She also expressed concern that Nick had been single for so long, he might have forgotten what real happiness with a partner feels like. (Yeah, mom got really, really real.) In any case, she definitely has all the makings of a fan favorite Bachelor mom, and it'll be exciting to see her again in the finale, hopefully witnessing her son's engagement.