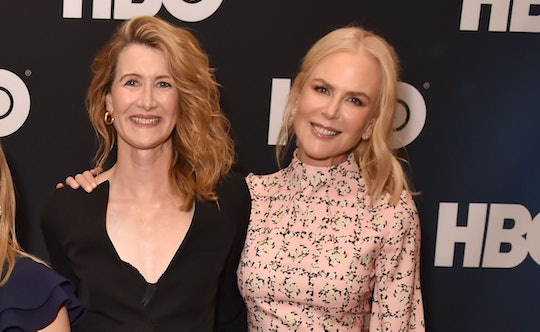 Photo by Jeff Kravitz/FilmMagic for HBO

The genre of "celebrities running the Ryan Seacrest gauntlet" enjoyed a nice bender at the 77th Golden Globe Awards when Nicole Kidman crashed Laura Dern's interview up on the platform, and was shortly followed by Keith Urban (why not), and then Paul Rudd (not sure why but here for it anyway).

Kidman, who stars on Big Little Lies with Dern, couldn't help herself when she saw her costar up in the limelight, stepping up and into the conversation, where she launched into an appraisal of All The Ways Laura Dern Is A Dream. "It's amazing what's happened to Laura," said Kidman, explaining that the two met and worked together back when each of the actors were not at their "peak." "Your talent taking you to where you are now — it's beautiful to see."

As Seacrest let the magic conduct itself, Dern responded that being able to work with people (she called out Reese Witherspoon, the cast and crew of Little Women, and others) she counted as genuine friends was something that she now expected on every job.

Then Seacrest welcomed Kidman's husband Keith Urban up onto the stage, followed by Paul Rudd, for reasons unknown, in a dramatic apex that resembled the bit where every single person in Les Miserables steps out on the stage singing their own bit in "One Day More."